[A note of gratitude and a heart full of appreciation to the Rev. Carlton Elliot Smith for his generosity, insight, and  reflections in the creation of this post. -DV]

“I appeared on the metro desk like a speck of pepper atop a heap of mashed potatoes. Actually, along with Gregory Lewis, who was an assistant city editor and reporter, and one other black male reporter, I was one of three pepper specks in a newsroom that contained roughly a hundred and fifty reporters, photographers, and editors.”

I was so struck by the image – and my memory flashed to the many Sundays in the many Unitarian Universalist congregations where I have preached. So often, the scene was comparable to what Alexander describes in the newsroom.

And this summer, at the 2016 Unitarian Universalist General Assembly in Columbus, Ohio, Black UUs are invited to gather in explicitly Black UU healing spaces. To gather in a place where you are not a speck, but “a whole shaker full of powerful people.”

Explicitly Black UU healing spaces that White UUs will respect and honor with our absence from them.

White UUs can respectfully affirm and promote the compassionate spiritual practice of explicitly Black UU healing spaces at GA 2016 and beyond. The religious institutions of Unitarianism and Universalism have historically prioritized access and care to White people – and this pattern must be changed if we are to have a future living faithfully into the promise of our principles and values.

If you are a Black UU and have never been to the Unitarian Universalist General Assembly because you thought it wasn’t for you or because costs were prohibitive, I pray this year will be different for you. May you find a faithful place of healing and belonging.

[Important Side Bar: Black Lives of UU can cover registration costs for any Black UU interested in attending UUA GA 2016 and “offer a limited amount of financial support for transportation & housing costs for Black UUs.”]

If you are a non-Black UU of Color, I pray that you will know that there is a place for you at this General Assembly as well, with spaces and conversations explicitly for your healing and loving within our Unitarian Universalist faith.

If you are a White UU, I pray that you will be willing to show up with compassion and grace and an open heart to General Assembly 2016 and to the work of institutional change that is essential to the integrity of this faith. 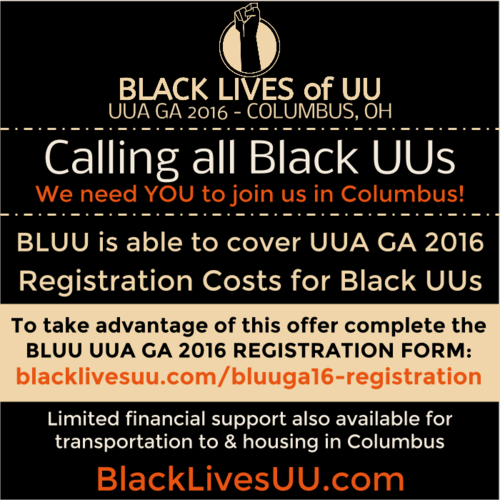 May 19, 2016 #Religion: Let’s Talk About the Relationship
Recent Comments
0 | Leave a Comment
Browse Our Archives
get the latest from
New Visions
Sign up for our newsletter
POPULAR AT PATHEOS New Visions
1