Beyond the Congeries of Banks: Finding a Moral Center

Beyond the Congeries of Banks: Finding a Moral Center June 30, 2016 David Breeden

After the September 1938 Munich Pact with which the European democracies ceded territory to Nazi Germany in exchange for what turned out to be one more uneasy year of peace, poet T.S. Eliot wrote:

We could not match conviction with conviction, we had no ideas with which we could either meet or oppose the ideas opposed to us. Was our society, which had always been so assured of its superiority and rectitude, so confident of its unexamined premises, assembled round anything more permanent than a congeries of banks, insurance companies and industries, and had it any beliefs more essential than a belief in compound interest and the maintenance of dividends?

T.S. Eliot’s answer to this crises of moral backbone was to leap even further in that “leap of faith” that had convinced him to accept Anglicanism a decade before.

Christianity, Eliot thought, could “match conviction with conviction” and “meet or oppose the ideas opposed to us.” Eliot doesn’t seem to have caught the irony that the Fascism that had cowed the UK and France also relied on a congeries of banks, industries, and Christian notions.

Nor does Eliot appear to have noticed that his particular brand of (White Anglo Saxon Protestant) Christianity had a hard nougat-y center when it came to resisting the enemies of Britain, but had nothing hard to say about the British exploitation and slaughter of various peoples in places the British called colonies.

Here’s one of my touchstones: Gods that serve as underwriters of our own prejudices are best considered no gods at all.

Unlike the religious wars of the Reformation period, it was not the certitude of religion that gave Fascism its might, but the power of vehemence and violence. The democracies eventually won, after they managed to generate even more vehemence and violence than the Axis powers could muster.

I think that we do well to admit that religion joins “a congeries of banks, insurance companies and industries” as beliefs no more meaningful than, or “more essential than a belief in compound interest and the maintenance of dividends.”

T.S. Eliot is remembered today not for his Christianity. Or his anti-fascist backbone. Or even his WASP prejudices and his sickening racism and anti-Semitism. No, Eliot is remembered for some poems he wrote that contributed to the human project of what we call the humanities.

Religions and political philosophies—and economics and economies—are all training wheels on humanity’s bicycle. It is with our art and our reasoned ethical standards that we begin the balancing act that leads to riding our big-kids bike.

How do we say no to the compromises that make up the Munich Pacts of our own time? As in Eliot’s day, religions will only confirm our preexisting prejudices. Religion can make you more Democratic or more Republican or more socialist or capitalist.

We must find other means to critique

our society, which had always been so assured of its superiority and rectitude, so confident of its unexamined premises . . .

What will make you more firmly human and humane? What will allow you to “match conviction with conviction” and “meet or oppose the ideas opposed to us”?

That’s the balance to find. And it’s why I’m a Humanist.

How about removing those training wheels and taking a nerve-racking but exhilarating free ride? 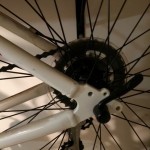 July 7, 2016 They Ain’t Heavy: UU Pluralism and Its Discontents
Recent Comments
0 | Leave a Comment
"Dear Author,As I read your words I am both "boosted", yet simultaneously frustrated for the ..."
Scot Reichman The Spiritual Practice of Agnosticism
"In other words it should be'celebrated' in the way we 'celevrate" Remembrance Day (11th hour ..."
Ivlia Blackburn The Meaning of Memorial Day
"Talk about that moral arc of the universe that bends toward justice is metaphysical talk—theology—not ..."
NoDifference #Charlottesville and Getting Real
"My tradition is Advaita Vedanta. Yoga is actually union with God. Advaita recognizes no duality ..."
Arthur Shimkus To Whom It May Concern: the ..."
Browse Our Archives
get the latest from
New Visions
Sign up for our newsletter
POPULAR AT PATHEOS New Visions
1