Aesop and the Story After Dallas

Aesop and the Story After Dallas July 14, 2016 David Breeden

Lion once went once hunting with Fox, Jackal, and Wolf.

They hunted and they hunted, and at last they surprised a stag, and soon took its life.

Then came the question of how to divide the spoils of their hunt.

This pleased Fox, Jackal, and Wolf, and they did as Lion asked.

Then Lion stepped in front of the meat and said: “The first quarter is for me because I am King of Beasts; the second is mine because it was I who decided how to split up the spoils; the third quarter is mine because of my hard work in the hunt today; and as for the fourth quarter, well, take it from me if you dare!”

Fox, Jackal, and Wolf had no choice but to slink away. As they did, Fox grumbled under his breath, “You may share the labors of the mighty, but never do you receive a share of the spoils.”

What would Lion do? I expect he might counter-protest with a Lion Lives Matter movement, or, more ingeniously, an All Animals Matter movement, all the while keeping the score exactly as it was: Lion 4; everybody else 0.

Lion controls the spoils. And the power. And the message.

In the non-allegorical world the story is a bit more complicated. In the United States, we have a dominant national narrative of progress and increasing equality. But we also have the stories the numbers tell—stories of a new Jim Crow. Stories of increasing economic disparity. Stories of marginalization. Oppression. Despair. In addition, there are the stories of individuals. Stories of microagrression, abuse, murder. The sorts of stories recorded on smartphones.

How would a contemporary Aesop tell this more complex story? A story in which some foxes, jackals, and wolves work for lions and even risk their lives in service to Lion’s system . . .

What’s up when all the animals get a vote, but Lion still gets the lion’s share?

What about story a that includes that stag whose life is so casually taken . . .

After Dallas, I see the struggles to tell a number of stories. I can’t find the words either. Still, I think that Southern writer Wendell Berry was onto something when he said of racism, “However conscious it may have been, there is no doubt in my mind that all this moral and verbal obfuscation is intentional.”

Aesop needs to get down to business telling some new stories. 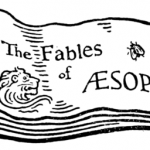 July 19, 2016 Law and Order: Donald Trump's Fantasy
Recent Comments
0 | Leave a Comment
Browse Our Archives
get the latest from
New Visions
Sign up for our newsletter
POPULAR AT PATHEOS New Visions
1