Donald Trump has promised us that he will be the candidate standing on the side of law and order in the face of all of the scary things going on in the world. And goodness knows, the world is a 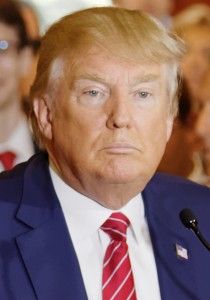 scary place. Shootings by police. Shootings of police. Terrorists and people who want to dignify their rage and maladjustment by looking like terrorists. So much feels out of whack, and who doesn’t want things to be ordered and tidy and safe?

But it’s worth having a closer look at what exactly “law and order” means. What are we being promised? At the simplest level, Trump seems to be promising that he will keep us safe. Just how exactly he would be able to make good on this promise is another question. The basis of the promise of law and order seems to be founded in a belief that all we need is harsher punishment for wrongdoers. We aren’t safe now because our leaders are “weak” and Trump promises that he is “strong.” And the definition of “strong” seems to be “willing to employ more extreme punishment.” If only our leaders were more willing to punish the evildoers, the theory goes, we all would be safe. If only we would hunt down the families of terrorists, or employ torture or build a wall or go to war then no one would dare to hurt us.

Only it doesn’t really work that way. Persecuting the families of terrorists or using torture on those suspected of being terrorists only convinces the extremists that they are righteous and helps with recruiting efforts. Becoming a terrorist yourself does not defeat terrorism. Here’s what we know from a behavior point of view. Yes, it is possible to stop a behavior that you don’t like through punishment. But you should know before you start that the chances of unanticipated fall-out are pretty good. You might stop your kid from misbehaving by hitting them, but if you do you will have upped the odds of them acting out in violent ways in the future. Going to war in Iraq created the conditions for ISIL to flourish. Your ability to impose order is simply never as complete as you would like it to be. Anyone who promises you that they are able to able to impose order on a complex human system is almost certainly lying. People have a way of stubbornly refusing to do what you think is right just because you beat them into it.

The appeal of “law and order” is that it offers a simple solution. We are right, and we simply have to impose our will on those who are not right. Believing that this works, in the face of mountains of evidence, is one of the most common of human errors.

In the simplistic mind of Trump, negotiation is weak. Understanding the perspectives of others and working toward mutually satisfactory goals is weak. Admitting mistakes or wrongdoing is weak. Gathering information to understand and interpret a situation as thoroughly as possible before acting is weak. None of those things impose order. They admit that life is complex and disorderly and people want conflicting things, often for very good reasons.

And a disorderly world isn’t safe. It isn’t predictable. It can be hard to assign sides, let alone the “good guys” and the “bad guys.” You might even find out, if you looked hard enough, that you weren’t entirely a “good guy” yourself. It isn’t simple. It isn’t neat. But it is the way the world works.

Law and order, at least the way Trump seeks to practice it through domination, is a fantasy. Worse yet, it is a fantasy that serves only those who are at the top, who have largely been able to arrange the world in the way they like it.

I am not a fan of anarchy. I believe in the rule of law. But law is a process—complex and ever-evolving. At its best, law is the practical application of justice. And I pray that somehow we will find our way toward the creative, surprising, messy, disorderly, complex, nuanced, ongoing pursuit of justice. It is what we all deserve.

Note: Opinions expressed in this post are those of the author, and are not intended as an expression of the views of her employer, the Church of the Larger Fellowship.

July 21, 2016 When Hope Seems Silly
Recent Comments
0 | Leave a Comment
Browse Our Archives
get the latest from
New Visions
Sign up for our newsletter
POPULAR AT PATHEOS New Visions
1