Last night I watched the powerful Ken Burns documentary Defying the Nazis: The Sharp’s War on PBS. If you haven’t seen this heartbreaking, beautiful piece, you can watch it online here. In 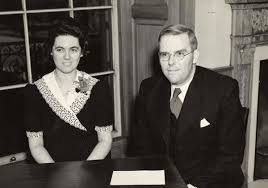 their own words, in the words of historians, and through the memories of those who were actually there, it tells the story of Waitstill and Martha Sharp, who risked their lives in Nazi Europe to bring hundreds of people to safety. It tells of the toll on their young family and ultimately their marriage that the years of dangerous work cost. You see the faces of people who probably never would have survived without the Sharps’ intervention.

And you can’t help wondering, as the story unfolds, what you would have done in that situation. Rev. Waitstill Sharp was a Unitarian minister, and when his denomination called on him to serve, he stepped forward. Not to serve the denomination, but to serve God, and to serve suffering humanity—which he did not distinguish from serving God. Martha left behind her own young children, though it tore her heart to do so, because she couldn’t stand by why so many other children were suffering and dying.

I am a minister with that same denomination. I, too, believe that we find God in the faces of strangers whose full humanity we recognize. Would I have gone? Almost certainly not. Nothing in my life would indicate that I am that brave, that caring, that willing to put my own body on the line. I’m far from proud of that fact, but it’s hard to deny.

So what would I do? Surely something beyond just turning my face on millions of people suffering and dying. The Sharps worked around the world raising money to make it possible for people to escape the Nazis and start again. Would I have given money? Probably. That’s certainly on the too-short list of things I do. Martha Sharp got a large group of children out of occupied Poland to safety in America. Would I have fostered one or more of those children until their parents could escape? I don’t know. I have never offered my home to a child fleeing violence in Central America. The Sharps struggled to get visas to allow Jews to escape the Nazi tide by moving to the US. But there were very limited quotas—it would have taken decades to get people out at that rate when they only had days or weeks to live. People didn’t want a bunch of “dirty Jews” coming into our country. Sound familiar? Turkey hosts 2.5 million Syrian refugees. The US is allowing in 10,000. Where am I as the campaign for a popular candidate for president compares human lives to Skittles candy and suggests that we should deny aid to all because some few might be “poison”?

Where, for that matter, am I as xenophobia and repression of the free press and demonization of the “other” are preached in my very own country as part of that political campaign? Where are you?

In Isaiah 6:8 it says “Then I heard the voice of the Lord saying, “Whom shall I send? And who will go for us?” And I said, “Here am I. Send me!” Will I be the one to say “Send me”? Unlikely. I am prone to both laziness and cowardice. I like my comforts, and I have never actually walked into significant danger because I thought it was the right thing to do.

And then I remember Moses, who, when confronted by a burning bush that told him to go to Pharaoh and demand the liberation of his people, suggested that maybe his brother-in-law would be a better option. I get that. I would totally argue with God that someone else could do the job. But Moses went. Unsure and stumbling, he kept walking forward, called on toward liberation. Maybe I could do that. Maybe you could too.

September 22, 2016 Ganesha, Nietzsche, Truth, Consequences
Recent Comments
0 | Leave a Comment
Browse Our Archives
get the latest from
New Visions
Sign up for our newsletter
POPULAR AT PATHEOS New Visions
1