Sharing in the Anthropocene

My ethics in terms of economics comes from the first of the Humanist Manifestos: “Humanists demand a shared life in a shared world.” That’s foundational for me. I know that it’s idealistic, but that’s what ethical stances are for, idealism.

This idealistic stance becomes more and more important to say out loud as we realize how damaged our planet is. The Anthropocene is what many are calling our new geological age—“antropos” meaning “people”—an age in which human meddling dominates the environmental conditions of our shared planet. The animals are dying. The seas are rising.

We’ve had a good look at life in the Anthropocene in the last few days. As coastal regions flooded, American Indians united around the Dakota Access Pipeline controversy. Hint: bulldozing the graveyards of others is not sharing very nicely.

I suspect that if humanity is to survive the Anthropocene, we will have to become adults and drop much of our mythical thinking.

Capitalism and supernaturalism go hand in hand in the controversy we see unfolding. As a Humanist, I have to be a suspicious that Capitalism, with its magical invisible hand of the markets, so closely resembles the theology of invisible powers that is part and parcel of monotheistic domination.

Why do the invisible helpers help those with money more than those without it? It’s almost as if Adam Smith’s brand of self-interested greed was made-to-order to reassure Christendom that the obvious destruction wrought by Capitalism is inevitable and somehow OK. Growth. It’s what Capitalism must have. God will sort it out.

The story of colonialism in the Western Hemisphere is a story of the seizure of resources, both natural and human. This seizure has been justified by the invisible hands of God and Capitalism. Resistance to exploitation by natives, unions, and the oppressed “proved” that they were godless and had to go.

I will be interested in hearing about someone’s experience of god and the invisible hand of the markets as soon as I hear from someone whose god does not agree with them. The next time I hear someone say, “I know God is a Republican, but I’m a Democrat,” I will be interested in hearing that person’s “testimony.” One reason for this is obvious: people like me, born into a religion that doesn’t fit our politics, bail. To state the obvious—religious freedom is good. Freedom from religion might be better in the Antropocene.

As the resources disappear, those invisible hands will become more and more important to the powers that are very real in our world—the ones with the bulldozers. And those powers will be more and more suspect to those of us who believe in a “shared life in a shared world.” 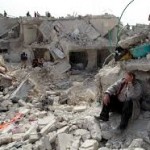 September 1, 2016
The Mindfulness of Stoicism, Part Five
Next Post

September 15, 2016 Humanism: Without God, Not Anti-God
Recent Comments
0 | Leave a Comment
Browse Our Archives
get the latest from
New Visions
Sign up for our newsletter
POPULAR AT PATHEOS New Visions
1