Because, as Franciscan priest Richard Rohr points out, suffering will be either transmitted or transformed. We transmit suffering in negative ways: depression, anxiety, anger, sleep loss, appetite loss, inability to focus, and on.

But it can be done.

You can’t find your keys. You’re running late. You are suffering. You can kick the dog.

Or you can pet the dog.

You can yell at the next person you see. Or you can smile and speak a kind word. It’s up to you.

Let me see how your religion or philosophy transmits or transforms suffering.

From shamanism to Cynicism to New Age, religions and philosophies are ways that we human beings have developed to deal with pain and suffering.

To tell the truth, philosophies and religions can’t do much about pain. Aspirin helps; anesthesia; morphine; some sorts of pills; exercise. But—outside of a small placebo effect—philosophy or religion don’t fix pain.

Suffering, however, is a mental formation, and something religious and philosophical practice can affect. Suffering is an emotional reaction. The Buddha realized that suffering is the heart of the human problem, and so he set out to face it head-on.

Suffering is caused, the Buddha said, by the nature of human life itself—nothing is permanent; everything changes. We want stability and sameness. But life cannot provide that. And so it is that we suffer.

We can end our suffering, the Buddha taught, by seeing the nature of reality and adapting our minds to that reality.

The Greeks too differentiated between lupe, sorrow, and ponos, physical pain. Epicureanism is based on the idea that we should first and foremost avoid pain and pursue pleasure; care in this pursuit helps with suffering.

Stoicism, like Buddhism, teaches methods for bearing and overcoming mental suffering. Hence Epictetus would say, “We are affected not by things (events) but by the view we take of things.

Father Richard Rohr has worked to bring these psychological insights into Christianity.

Perhaps these methods of dealing with the human condition sound pessimistic, but even a cursory look at the evidence around us shows that change is what we get, and change often brings suffering.

One of the complications of being a Humanist is that we don’t have any scripture. We don’t have any way to off-load our personal hurt onto scriptures or gods—there’s no scripture saying it’s OK to kick the dog or use patriarchy. There’s none of the “eye for an eye” business. Nope. We have to face up to our actions. We have to face the facts—are we transmitting suffering rather than transforming it.

We have no excuse for kicking the dog. Or taking it out on our fellow citizens of the world.

Sure, sometimes even a Buddha is going to kick the dog. That’s human nature, that transmission thing—to off-load our suffering onto others. But we don’t get to excuse ourselves. The dog doesn’t get un-kicked because we’re sorry. Repentance doesn’t include the removal of the pain the dog felt when it got kicked. We’ve got to keep ourselves ever-ready to transform.

We always have to do better next time. 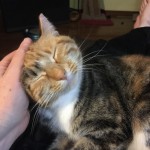 November 15, 2016
Be about that loving and justice-making
Next Post

November 17, 2016 Now What?
Recent Comments
0 | Leave a Comment
Browse Our Archives
get the latest from
New Visions
Sign up for our newsletter
POPULAR AT PATHEOS New Visions
1