Help me think this through, people. On the one hand, there are folks—good, honorable folks—who are saying that we need to pay attention to the result of this election, to get serious about 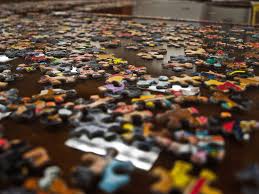 addressing the needs and concerns of people who feel abandoned by the system. That we need to really hear the perspective of white, rural Christians who feel like they are discounted or even made fun of by the liberal elite.

And, you know, I am all about the talking and the understanding and the hearing from different perspectives. I believe in the worth and dignity of every person. I believe that we need to learn to listen more broadly and not be so protective of our assumptions.

But on the other hand there are people—sound, sensible, caring people—who say that our job is to fight for what is right, and that anyone who votes for a racist is, in point of fact, themselves racist. We don’t really know whether Trump is a racist who despises folks who aren’t white, or whether he sold his soul to those racists in order to get elected. And it really doesn’t matter. If you buy in on a package that includes racism and xenophobia, you declared you were willing to take it as part of the deal. That pretty much makes you a racist. And it isn’t our job to empathize with people who endorse hate, it’s our job to combat them.

I do believe that we are seeing a backlash to having had a Black president, and to the power of the Black Lives Matter movement, and to the movement for equal rights for LGBT folks, including same-sex marriage and a significant increase in the presence of trans people in the media. And I believe that if you give in to a backlash and try to appease people you are allowing an inevitable part of the process of change to utterly derail the movement forward that you have gained. Now is not the time for white people to give other white people a pass on their racism.

People—all people—need to be treated with respect. All people have legitimate concerns for the health, safely and stability of their lives and their families’ lives. But all people are not right. They just aren’t.

OK, I am just as biased as anyone else. Probably more so, given that there are quite a lot of things I feel passionately about. But I am clinging to my conviction that education is better than ignorance, that it is better to choose based on actual information than on “common sense,” which is quite often dead wrong. I am convinced that while there are many good things from each person’s heritage that are worth holding on to with love and gratitude, that anyone who thinks they can make things go back to the way they used to be is just delusional. Manufacturing jobs have been replaced by robotics and aren’t coming back. Immigration is not going to stop, and if it did the effects on our economy and society would be devastating. Trickle-down economics has never worked and never will. Queer people aren’t going back in the closet. Women who have embraced feminism aren’t going back to seeing themselves as subservient. And without a whole lot of concerted effort to combat them, climate change and ecological devastation are going to be cataclysmic. You could argue about these things, but you would be wrong. The evidence is overwhelming.

But the people who don’t believe these things aren’t going to listen to the evidence. Believe me, I’ve tried. People don’t stop being racist because you point out their racist behavior, any more than climate change deniers suddenly see reason if you show them the facts. Some ridiculous percentage of this country doesn’t even believe in evolution. Sadly, the science on confirmation bias is pretty clear—if someone passionately holds a belief, presenting them with facts that counter that belief only makes them cling to it more strongly.

So how do you value the point of view of people who are, for the most part, good folks who care for their families and neighbors and have genuine experience of loss, but who are simply and incorrigibly wrong about the solutions to their problems?

It has occurred to me that the only way for people to really own what they have chosen is to experience the consequences. If you think that the definition of better government is smaller government, I suspect the only way you will gain a different perspective is if you lose your Medicare or ACA guarantee of health insurance coverage, if you lose your Social Security or government programs in support of the poor, if you watch the deficit explode and the jobs dwindle in spite of the fact you were promised otherwise. That may be the only lesson that will get through.

Unfortunately, it’s a lesson that we all would have to live with, and nobody I know seems to think that’s an acceptable solution. It’s a lesson that many of us, and the planet as a whole, could very well not survive.

So here we are. Here’s the place where I’m supposed to give you the brilliant solution. Good luck with that. Here are the only pieces I know, and we’re all going to have to figure out how to put them together:

Also, and this is a statement of faith, but I would never deny that faith is a powerful thing:

November 17, 2016
Kick the Dog, Pet the Dog—Off-Loading Anxiety
Next Post

November 24, 2016 At #Thanksgiving, A Wish for Freedoms
Recent Comments
0 | Leave a Comment
Browse Our Archives
get the latest from
New Visions
Sign up for our newsletter
POPULAR AT PATHEOS New Visions
1