An Antidote to Racial Theatre

Whatever your political leanings, Democracy in Black is an essential book. Princeton University history professor Eddie Glaude mixes the gravitas of an academic historian with the brio of a concerned citizen writing a letter to the editor of the local paper. Along the way he takes both liberals and conservatives to task for creating, prolonging, and ignoring the suffering of black America.

Perhaps the best summary of this important book is to use contemporary parlance: Dr. Glaude shows that racism is a feature of the system, not a bug.

Glaude outlines the problem of race in the United States in the starkest terms. We have “to wake up and give everything to ‘achieve our country’ or to remain asleep as America burns.” Our situation springs from three causes: “the practice of White Supremacy;” white fear of retribution or retaliation for centuries of wrongs; and black fear of the consequences of white fear. Glaude says, “White fear is the danger. Not black people.” A simple statistic says it all: “The odds of a black person killing a white person are about 0.0000212.”

As a result of the 2008 recession—which Glaude calls the “Great Black Depression”—240,000 African American homes were lost. In addition, unemployment among black Americans is consistently at twice that of white Americans, and black Americans suffer the brunt of the privatization of prisons and schools. Then there are the constant police killings.

One product of White Supremacy is the fact that organizations still presume to speak for African Americans—organizations that have little accountability to anything beyond a set of black liberal principles, the chief of which is that white people must not become fearful. This principle created the paradigm for black politics in the post-Civil Rights era, a move toward “deracialization.” In this paradigm, “Black voters would elect black politicians with the understanding that the politicians are constrained by white racism in terms of what they can address explicitly.”

Thus was created the white-washed Martin Luther King popular among white liberals. Thus developed a racial politics useful to both Ronald Reagan and Bill Clinton as the nation moved farther and farther to the right. Glaude claims that the apogee of this style of politics was the election of Barak Obama. Far from being the harbinger of a post-racial society, Obama cemented the notion that white people must never be confronted with racism and that personal responsibility—not social responsibility—is paramount.

One use of history is to show us how the present might be different; to see how we might free ourselves of seemingly intractable structures such as patriarchy, class, and racism. Professor Glaude sees a way forward in the de-centered, social-media powered movements that have developed since the shooting of Michael Brown in Ferguson, Missouri in 2014.

Unlike the personality-centered protests of the past, contemporary protest is flexible, mobile, and focused on real solutions, not compromise with white fear. These young leaders, Glaude believes, may finally have found the antidote to the racial theatre that has kept white supremacy supreme for so long: “We know what democracy can be, because we have felt viscerally what it is not.”

I received this book from Blogging for Books for this review. 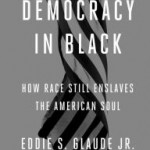 March 24, 2017 Smells Like White Racism
Recent Comments
0 | Leave a Comment
Browse Our Archives
get the latest from
New Visions
Sign up for our newsletter
Related posts from UU Collective

I Promise You
I was in a circle of those who climbed from the sea...
view all New Visions blogs
What Are Your Thoughts?leave a comment
Copyright 2008-2020, Patheos. All rights reserved.