We Are What We Behold

We Are What We Behold August 2, 2018 Michael Martin

I’ve been thinking a lot about the significance of tools.  There is a quote that says, “We become what we behold. We shape our tools and then our tools shape us.”  This quote is often attributed to media theorist Marsh McLuhan. It was actually stated by Father John Culkin, a Catholic priest, professor of communication, and friend of McLuhan’s.

It is a profound theological statement if you think about it.  Human beings are created in God’s image. God is a creating God, so part of being created in God’s image means that humans also have the capacity to create.  We create tools to interact with the world around us; all kinds of tools. But just as God created humans to be in responsive relationships with, there is also a mysterious, responsive relationship between humans and the tools we create.

There are so many tools that shape our world towards death.  In a sense, guns are tools; and we can see how guns used for violence are shaping the world around us.  Individuals as well as our culture are bending more and more toward fear, violence, and death; whether suicides, domestic violence, gang violence, police shootings, and all-out war.  We are facing an epidemic in our society. Our world is in need of some better tools.

RAWtools inspired a group of us in Toledo, OH to take our tools seriously.  Inspired by the prophetic vision to beat our swords into plowshares, we wonder what it would look like to be shaped more by garden tools than by guns.  This is true both in the literal sense; we are forging guns into garden tools. It is also true in the symbolic sense; we are using blacksmithing as a lens to think creatively and constructively about the type of world we want to live in. 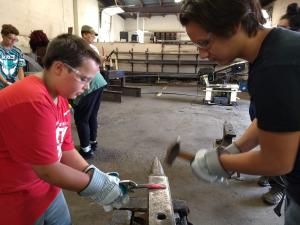 The guns came from Bob S of Cincinnati, OH.  Bob inherited a collection of 24 guns from his father, who was a hunter and collector.  Bob didn’t know what to do with the guns. He didn’t necessarily want them, and he certainly didn’t want them to end up in the hands of someone who might use them in destructive ways.  He learned about RAW Tools, and for a number of years had tried to donate the guns to RAW Tools in Colorado and be a part of making a tool.

Because of circumstances and distance, it was hard to coordinate, but when RAW Tools Toledo began, a new opportunity arose for Bob to donate the guns.  Toledo and Cincinnati are only a few hours apart, so Bob and his wife drove to Toledo to donate the guns.  When they arrived, they helped to disable the guns and also got to participate in making their own garden tool.

In partnership with RAWtools as its first regional chapter, we not only want to think about these important questions, but also to act on them.  We want to experiment with our tools and forge new ways of thinking and being.

Our first step toward this is this 5-session class that teaches the art of blacksmithing.  The class will bring youth and adults together, introduce them a practical and creative skill, and facilitate discussion about the kind of world we want to live in.  Each student will create a garden tool that they forged from a gun (from the 24 that Bob donated), and the group will use the remaining gun parts to create a group sculpture. By the end, students will have created a tool, participated in a group project, and hopefully begin to see the world through new lenses.

The work is only beginning, but already a small, but growing group in Toledo has caught this vision and has begun to collaborate with RAWtools to forge better tools for our city, our lives, and our world. 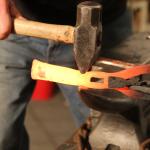 Hospitality in Zarephath
slacktivist
Related posts from Voices of RAWtools: Forging Peace in a World of Violence

Progressive Christian
From Fear to Freedom
Voices of RAWtools: Forging Peace in a World of Violence 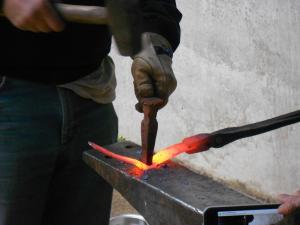