An Eschatological Icon of the Church

An Eschatological Icon of the Church December 8, 2011 Mark Gordon

At the center of salvation history stands a simple Jewish peasant girl. As the Old Testament began with the story of Eve, the New Testament begins with the story of Mary, the New Eve, mother of the New Adam. She is the Theotokos, the God-Bearer, Ark of the New Covenant. She is the first Christian, and the mother of the Church, which is the Body of her son, Jesus Christ. It is therefore entirely appropriate that on the Feast of her Immaculate Conception we should pause to contemplate this plain Jewish maiden, the Mother of God.

As a former Evangelical, there is still something deep within me that flinches ever-so-slightly at the invocation of the Blessed Virgin Mary. Though all of my old questions about Mary’s role in salvation history have long since been resolved, and although I’ve now been consecrated to the Immaculate Heart for well over a decade, I remain conscious of that imperceptible spasm of reservation that awakens upon hearing the Angelus, the Regina Coeli, or any other Marian prayer.

So it is odd that I should always be so moved by reading the great Marian hymn of the East, the Akathistos, which dates from the Sixth Century. The language is florid, as was often the style in the history of the Church; and yet, this hymn – a litany, really – manages to navigate the delicate line between the entirely proper exaltation of Our Lady as humanity’s greatest perfection (hyperdulia) and the improper, near-idolatrous worship of Mary (latria) that can sometimes be detected in popular devotion. As St. Louis de Montfort wrote in True Devotion to Mary: “If devotion to our Lady distracted us from our Lord, we would have to reject it as an illusion of the devil.” The Akathistos avoids becoming such an illusion by always placing Mary in a subordinate role to Jesus Christ, our God and Savior. Thus, she is the tendril, not the bud; the soil, not the fruit; the table, not the meal; and the rock, not the living water that springs from it.

Having so sweetly depicted the Mother of God, even a former Evangelical like myself finds no difficulty in joining the ancient Church, as together we sing:

My favorite image of Mary is the one found in the Catechism, which calls her “an eschatological icon of the Church.” Mary’s relationship to the Church is at once complex and beautiful. As the first Christian – she believed in him from the moment of her fiat – she is a daughter of the Church, the mother of all Christians. But as the Theotokos, the God-bearer, she is also mother of the Church’s Head, and therefore Mother of the Church, his Body. These divergent yet complementary roles are reconciled into one reality in the Eucharist. The Second Vatican Council called the Eucharist “the source and summit of the faith.” To the extent that the Church is Eucharistic, the Church will be Marian. The German writer Carl Feckes summarizes the Eucharistic nexus of mariology and ecclesiology:

As Mary bore the earthly Christ, so the Church bears the Eucharistic Christ. As the whole life of Mary is centered upon bringing up and protecting Christ, so again the deep life and solicitude of the Church are centered on the Holy Eucharist. As Mary gives the earthly Christ to the world and from this Gift are born the children of God, so also the Eucharistic Flesh and Blood made present by the Church form the living children of God. As Mary offered up Christ together with Himself at the foot of the cross, so the whole Church, at every Mass, offers His sacrifice with Himself to the heavenly Father.

Feckes could have gone on to note that as Mary reigns with the Risen Christ in Heaven, so the whole Church will reign with Him there in the final consummation of the Kingdom. To put it all in other words: Mary was what the Church is now, and Mary now is what the Church will be. When we take our eyes off Mary, we can tend to forget where the Church comes from and the purpose for which it presently labors here below. We also forget where and with Whom our destiny lies.

December 8, 2011 Imitation and Truth: The Interdependent Nature Of Eternity and Temporality
Recent Comments
10 Comments | Leave a Comment
"Yes, those are all dimensions that need to be addressed. The question of the reception ..."
David Cruz-Uribe Reading Rerum Novarum, Part IV
"You frame the question as one asking why Catholic workers failed to embrace Catholic unionism. ..."
JoeGeorges Reading Rerum Novarum, Part IV
"Brett, thank you for your response. I would be delighted to read and comment on ..."
David Cruz-Uribe The number six and neutrality: a ..."
"Hi David, Thank you for your engagement with my piece. Sorry for the slow reply. ..."
Brett Salkeld The number six and neutrality: a ..."
Browse Our Archives
get the latest from
Vox Nova
Sign up for our newsletter
POPULAR AT PATHEOS Catholic
1

Catholics Should Have Nothing to do...
On the Catholic Beat
Related posts from Vox Nova 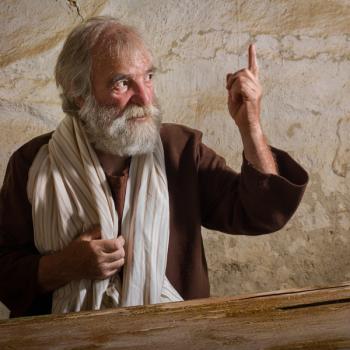