St. Vincent: Not Much of a Saint, But Getting Better 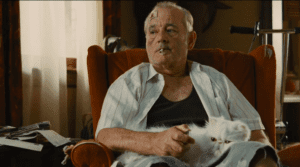 We hear that a lot in the indie movie St. Vincent—much to the frustration of our titular hero (Bill Murray). The bank uses those words when he’s turned down for a loan. He hears it again when his beloved wife, stricken with dementia, is going to be turned out of her care center. “It is what it is,” he’s told.

But while that may be true of Vincent’s money woes, it’s not true of people. Not Vincent, anyway.

When folks first run into Vincent, they think they understand him—or, as much as they care to understand him. I mean, what is there really to get? a drunk. A gambler. One of the world’s worst neighbors. That is who he is, you might say.

But when Vincent starts babysitting Oliver (Jaeden Lieberher)—a skinny kid with problems of his own—Vincent starts revealing some other, hidden aspects of his character. He cares, in his own curmudgeonly way, for his wife (who doesn’t recognize him anymore), for his mistress (that he pays by the hour), for Oliver himself. Vincent is more than who he is. And Oliver learns some valuable, if twisted, lessons from the guy—the value of courage, sacrifice and hope.

Vincent is not unique. Just extreme. To much of the world, we are who we are—even when we know we could and should be better. When we make a bad impression in a job interview or say the wrong thing to a friend, we say, “Man, I’m better than that.” We all have those woulda-coulda moments. We sometimes let ourselves down. We’re always falling short of what God originally designed us to be.

Vincent’s sort of given up the idea that he’s better than who he seems to be. And yet, his goodness sometimes slips out, almost in spite of himself.

Now, let’s not make too much of Vincent’s occasional saintliness. While Oliver may have learned some valuable lessons from his crotchety next-door neighbor, Vincent was just taking care of the people he loved. Jesus said the real trick is to love your enemies. “For if you love those who love you, what reward do you have?” he says in Matthew 5. “Do not even the tax collectors do the same? And if you greet only your brothers, what more are you doing than others? Do not even the Gentiles do the same?” So while Vincent’s sweetly masquerading as the doctor to his dementia-stricken wife and teaching Oliver a few self-defense moves, it’s not like the guy’s doing anything unusually remarkable.

But after Oliver selects Vincent as a “saint” for a school project, there are signs—small, subtle—that he may try to better live up to Oliver’s beatified opinion of him. When Oliver shows him how to get two snacks from a machine instead of one, Vincent acknowledges it’s a pretty cool trick—but cautions him against stealing And then, at the very end of the movie, we see this scene of him singing Bob Dylan’s “Shelter From the Storm.”

Now, this may not look like much, but consider: His entire yard is dirt. It doesn’t look like he’s given the thing much thought for about a decade. His yard, really, is a metaphor for Vincent’s own slovenly life. And yet here he is, watering the thing. Messily, yes. Haphazardly, yes. But hey, this is a guy who lost most of his money at the racetrack and never even went to the john without a drink in his hand. Baby steps, people, baby steps.

I think we’re like Vincent in this way, too. We’re better people if the folks around us think we’re better and expect us to be better. I know I am. I need people around me to remind me of who I should be and what I should do. If left on my own, who knows what sorts of trouble I’d get into.

But sometimes this dynamic cuts both ways. When our family and friends expect us to behave a certain way, we don’t want to let them down. We can be less-than-honest about our own struggles and insecurities and failings, and that can lead to what I think we Christians can be particularly guilty of: Pasting on fake smiles and passing on false platitudes to keep up an appearance of holiness.

The trick, I think, is to be honest about who we are (in our less-than-ideal moments), while using the expectations and encouragement of others to help us get ever closer to the people we should be, and the people that God wants us to be.

The Apostle Paul understood all this. In 1 Thessalonians, he writes this:

For you are all children of light, children of the day. We are not of the night or of the darkness. So then let us not sleep, as others do, but let us keep awake and be sober. For those who sleep, sleep at night, and those who get drunk, are drunk at night. But since we belong to the day, let us be sober, having put on the breastplate of faith and love, and for a helmet the hope of salvation. For God has not destined us for wrath, but to obtain salvation through our Lord Jesus Christ, who died for us so that whether we are awake or asleep we might live with him. Therefore encourage one another and build one another up, just as you are doing. (1 Thessalonians 5:5-11)

“Encourage one another,” Paul says. Clearly, there’s a sense of accountability here—the idea that our friends can help us be better people. But that encouragement, I think, also extends to encourage each other during difficult times, too—those moments when we might stray or let ourselves down.

Vincent could use that sort of accountability and support. But then again, couldn’t we all?

October 24, 2014
Birdman: Finding a Life of Flighty Purpose
Next Post 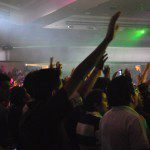 October 29, 2014 Entertaining Churches, Preachy Movies
Recent Comments
0 | Leave a Comment
"Thanks, BrowserPhil ... so embarrassing. Aravis was from The Horse and His Boy, right?"
Paul Asay Narnia Comes to ‘The Falcon and ..."
"Please replace Aravis with Jadis. :-)"
BrowserPhil Narnia Comes to ‘The Falcon and ..."
"I know that the first film on this list not explicitly about Christian faith, Denis ..."
Robert Charles The 12 Best Non-Christian Christian Movies ..."
"The author, starts the article with a dismissive/arrogant affirmation unto all that are worthy to ..."
oscar deltoro ‘I’m Just Fascinated by It.’ Morgan ..."
Browse Our Archives
get the latest updates from
Watching God
and the Patheos
Entertainment
Channel
POPULAR AT PATHEOS Entertainment
1