Thank Goodness We Can Watch ‘The Interview.’ (Whether We Should is Another Matter.)

Thank Goodness We Can Watch ‘The Interview.’ (Whether We Should is Another Matter.) December 17, 2014 Paul Asay 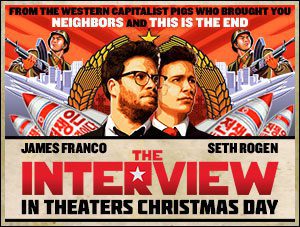 The Hobbit: The Battle of the Five Armies, was released today. The Hunger Games: Mockingjay – Part 1 continues to make a mint. A slew of Oscar hopefuls are springing up in theaters across the country. But no matter. Everyone’s talking about The Interview—a film nobody’s seen yet.

I could think of a better movie to become a rallying cry for free speech, but here we are.

A little background: The Interview is an R-rated comedy starring Seth Rogen and James Franco predicated on the assassination of North Korea’s Kim Jong-un. As you might expect, Kim Jong-un was not thrilled to be both mocked and killed in an American motion picture. And perhaps not-so-coincidentally, hackers have been tormenting Sony, the movie’s distributor, with what could be described as digital Chinese water torture—doling out embarrassing e-mails to unreleased movies to the public.

But with The Interview’s release date fast approaching, the hackers have taken another disturbing step: Threatening anyone who sees the flick with death. From the hackers:

We will clearly show it to you at the very time and places ‘The Interview’ be shown, including the premiere, how bitter fate those who seek fun in terror should be doomed to. Soon all the world will see what an awful movie Sony Pictures Entertainment has made. The world will be full of fear. Remember the 11th of September 2001.

The threats have made some impact. The New York City opening of the movie was cancelled, and several theater chains say they won’t show it. Others may follow.

But as the hackers try to discourage Americans from seeing The Interview, North Korea may now be faced with keeping the movie from being seen by its very own people. According to The Hollywood Reporter, human rights activists are planning on dropping scads of DVD copies of The Interview on the Hermit Kingdom.

This isn’t the first entertainment airlift we’ve seen. A group called Fighters for a Free North Korea has apparently smuggled DVDs into North Korea for years—ranging from movies such as Braveheart to TV shows like Desperate Housewives. (It is reported that North Koreans are particularly fond of films starring Arnold Schwarzenegger and Sylvester Stallone.)

“Viewing any one of these is a subversive act that could get you executed, and North Koreans know this, given the public nature of the punishments meted out to those who dare watch entertainment from abroad,” Thor Halvorssen, founder of the Human Rights Foundation, told the Reporter. He adds that “North Koreans risk their lives to watch Hollywood films … and The Interview is tremendously threatening to the Kims. They cannot abide by anything that portrays them as anything other than a god. This movie destroys the narrative.” 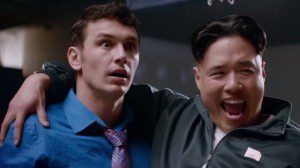 What? A silly, salacious, R-rated comedy potentially bringing down the despotic North Korean regime? Well, that is admittedly unlikely. But believe it or not, the movies make a difference. One North Korean told human rights activists how watching the movie Titanic was a catalyst for her eventual escape.

“It gave me a taste of freedom,” she said. “A man willing to die for a woman—it changed my thinking. It changed the way I saw the regime and the endless propaganda. Titanic made me realize that I was controlled by the regime.”

I live in a country where some folks believe persecution is having a sales clerk say “happy holidays.” It’s hard for Americans to truly conceive of a world where watching a movie could mean death. In a way, the stories surrounding The Interview has been a good reminder to me. When the threats started surfacing, my Plugged In editor told me it’d be OK to bow out of our advance screening if I wanted to—just in case. But for me, I feel curiously more motivated to go. Even if The Interview isn’t ultimately worth watching, it’s wonderful we have the freedom to watch it.

In writing the Declaration of Independence, Thomas Jefferson and his editors alleged that humans are “endowed by their Creator with certain unalienable rights.” Those rights aren’t dependent on manmade laws or rules. They go beyond the power of sword and pen and extend to everyone—even those who live in countries that don’t recognize those rights. I’d argue that freedom of speech is foremost in our list of inalienable rights. If our forefathers were correct, the right to make movies like The Interview is a gift from God.

Granted, we tend to squander our rights at times. We waste our stories. The way we use our freedoms, including our freedom of speech, doesn’t always do ourselves or our culture much credit. I haven’t seen The Interview, but—just guessing, here—I’m not anticipating the film to really make a particularly cogent or thoughtful political statement.

But sometimes, circumstances have a way of redeeming stories that, otherwise, might not have a lot going for them. And if a few folks in North Korea bravely pop in The Interview and consider more fully their beloved leader, well, I’ll be happy. 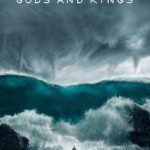 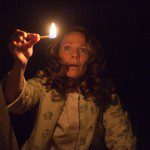 December 19, 2014 Finding Christmas Light in Dark Movies
Recent Comments
0 | Leave a Comment
"Thanks, BrowserPhil ... so embarrassing. Aravis was from The Horse and His Boy, right?"
Paul Asay Narnia Comes to ‘The Falcon and ..."
"Please replace Aravis with Jadis. :-)"
BrowserPhil Narnia Comes to ‘The Falcon and ..."
"I know that the first film on this list not explicitly about Christian faith, Denis ..."
Robert Charles The 12 Best Non-Christian Christian Movies ..."
"The author, starts the article with a dismissive/arrogant affirmation unto all that are worthy to ..."
oscar deltoro ‘I’m Just Fascinated by It.’ Morgan ..."
Browse Our Archives
get the latest updates from
Watching God
and the Patheos
Entertainment
Channel
POPULAR AT PATHEOS Entertainment
1