American Sniper: Holding Out for a Hero

American Sniper: Holding Out for a Hero January 19, 2015 Paul Asay 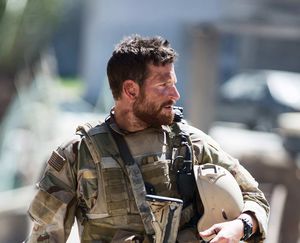 Weird for a movie that people seem to hate so much.

Never mind the praise: Criticism of Sniper has been withering. Documentary filmmaker Michael Moore went on Twitter and called snipers “cowards” (though he later denied his tweets were a direct reference to American Sniper). Comic actor Seth Rogen seemed to compare the movie to Nazi propaganda. Lindy West, writing for The Guardian, called Kyle a “racist who took pleasure in dehumanizing and killing brown people …”.

The movie, critics say, has been commandeered by some as an uncritical salute to a guy who became a hero by killing upwards of 160 men, women and children.

But I think both the movie’s most ardent fans and vocal critics got the movie all wrong. Sure, Eastwood is giving us a hero in American Sniper—just not the one we think we’re getting.

Eastwood knows a thing or two about the topic. As an actor, he came to embody a certain heroism—a long, lean, dispenser of frontier justice. But as a director, Eastwood has shown more skepticism toward traditional heroic journeys. He deconstructed what it means to be a hero in his Oscar-winning directorial turn in 1992’s Unforgiven. In 2008’s Gran Torino, he gave us the opposite of Dirty Harry—a hero who performed his greatest heroic act by not fighting back. Yes, Eastwood gave us patriotic war heroes from the battle of Iwo Jima in the 2006 film Flags of Our Fathers, but not blindly so. And the following year, he unpacked the same battle from the perspective of the Japanese in Letters From Iwo Jima. So to suggest that American Sniper is a slavish, superficial biopic might not be giving its director enough credit.

Chris Kyle (played by a fantastic Bradley Cooper) probably wouldn’t call himself a hero. Rather, he might characterize himself like his father did—as a sheepdog, protecting the sheep from the world’s wolves. He serves four tours of duty in Iraq, and for him the conflict is not a reason to wring his hands or mull the inherent brutality of war. It’s a job. No, more than that: A calling. He was meant to serve his country in this manner. He was made to protect his brothers in uniform. And Kyle serves his calling with the same laser-like focus that made him such a lethal marksman. He does not question. He does not doubt. He serves.

“Do you ever think that you might have seen things, or done some things over there that you wish you hadn’t?” a Navy doctor asks him.

“I was just protecting my guys,” Chris says. “I’m willing to meet my Creator and answer for every shot that I took. The thing that haunts me are all the guys that I couldn’t save.”

Kyle doesn’t struggle because of what he did, but rather what he didn’t—or, now that he’s back home for good, won’t. He thinks that some people will die because he’s not around to protect them.

People call Chris Kyle a hero because he’s so good at his job. And, to the soldiers and SEALs he protects, he is. 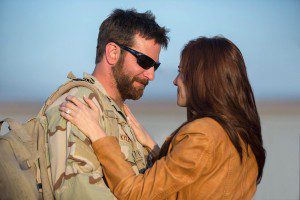 But Eastwood doesn’t leave it at that. Even as he saves lives in Iraq, he takes them, too—necessary, Chris believes, but sad nevertheless. Meanwhile, his wife, Taya (Sienna Miller), and children suffer at home without him. And when he comes home, Chris isn’t the man he was or should be. He’s distant and distracted. Sometimes inexplicably angry. When he returns home, he struggles to relate to his wife and young kids (an issue a lot of returning vets have). He can’t quite turn off his wartime self at home.

“If you think that this war isn’t changing you, you’re wrong,” Taya tells him. “You can only circle the flames so long.”

To me, it seems Chris’ real act of heroism was to leave Iraq and return home for good—to reclaim his wife and family, to be the husband and father they needed and deserved. It wasn’t easy to become that man again, to set aside his legend for a more domestic legacy. It’s relatively easy to be a war hero when you’re built for war. But to be a hero in your own house? Now, that’s hard. It requires a different sort of heroism and courage and tenacity—something that doesn’t win you any medals or get you any book deals. But it’s what Chris had to do.

Yes, Eastwood acknowledges Chris Kyle as a war hero, which I think he was. But the Chris Kyle we meet in American Sniper is more than that. He’s a complex, conflicted man, full of his own strengths and weaknesses. And if Eastwood celebrates this multifaceted man, it’s as a husband and father—a man who put down his gun to pick up his son.

January 16, 2015
Oscars Missed a Good One in Calvary
Next Post

January 20, 2015 A Literary Digression
Recent Comments
0 | Leave a Comment
"Thanks, BrowserPhil ... so embarrassing. Aravis was from The Horse and His Boy, right?"
Paul Asay Narnia Comes to ‘The Falcon and ..."
"Please replace Aravis with Jadis. :-)"
BrowserPhil Narnia Comes to ‘The Falcon and ..."
"I know that the first film on this list not explicitly about Christian faith, Denis ..."
Robert Charles The 12 Best Non-Christian Christian Movies ..."
"The author, starts the article with a dismissive/arrogant affirmation unto all that are worthy to ..."
oscar deltoro ‘I’m Just Fascinated by It.’ Morgan ..."
Browse Our Archives
get the latest updates from
Watching God
and the Patheos
Entertainment
Channel
POPULAR AT PATHEOS Entertainment
1