White Boy Rick features two scenes that stick with me.

The first: Rick Wershe Sr. (played by Matthew McConaughey) picks up his infant granddaughter for the first time—cradling her in his arms, reminiscing about how he used to hold his son, Rick Jr., the very same way.

The second: Father and son sneak into a drug den, looking for Rick Sr.’s daughter, Dawn (Bel Powley). They find her, stoned, nearly incoherent. Rick Sr. picks Dawn up, and she begins wailing, shrieking, flailing. No! she screams. No! But Rick carries her into the hallway and down the stairs until Dawn, apparently exhausted and resigned, grows quiet in his arms.

He carries two children in the space of 10 minutes, one in tragic mimicry of the other. And we’re reminded that family doesn’t always look like it should.

White Boy Rick is based on the true story of Rick Wershe Jr. (Richie Merritt), and it seems to try to be several movies at once: a straight-up biopic, a salaciously gritty crime drama, a dark comedy. And perhaps because of that lack of focus, the film never wholly succeeds.

But when the focus moves from Rick Jr. to his father, White Boy Rick becomes far more compelling: It becomes the story of a father who loves his kids, but feels he failed them. And the grief of it all tears him apart.

He’s not altogether wrong. He was a bad father in a lot of ways. A minor-league gun hustler on the streets of Chicago, he drinks and swears and is, overall, a pretty terrible role model. Sure, he teaches his namesake boy, Ricky, everything he knows about guns and salesmanship—how giving a customer an AK-47 at a discount price, then charging more for a homemade silencer is like upselling a fast-food customer with an order of fries. And young Ricky learns that lesson well.

But Rick teaches precious little else. Rick’s life, and by extension that of his family, has always been overloaded with chaos and drama. The family home is littered with trash and guns, the air filled with shouting and swearing. Rick has bigger dreams for him and his family. But that someday is just a fantasy, and Ricky knows it by the time he’s in his mid-teens. He looks at his father and sees something else: failure.

So Ricky adopts another father figure, the neighborhood gangster Johnny Curry. He’s got what his father doesn’t: Success. Respect. Soon, Ricky’s become a full-fledged, drug-selling gang member (who, unbeknownst to Curry, is working for the FBI on the side). And all Rick Sr. can do is watch his son drift farther and farther away from him.

For much of the film, Rick feels like he lost both of his children—Dawn to a world of drugs and Ricky to the glamorous kingdom that sells them. Rick knows—knows—that if he’d been a better father, his kids would be in a better place.

But while Rick sure could’ve been a better dad, no doubt, here’s what he and, I think, a lot of us moms and dads forget: He didn’t force his son and daughter to make poor decisions. They made their own choices. 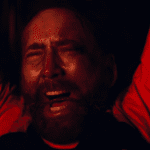 September 12, 2018
Mandy is the Craziest Movie of the Year. (Naturally, It Stars Nic Cage)
Next Post 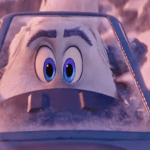 September 26, 2018 Here's a Fun Clip From Smallfoot, and Gina Rodriguez Says Hi
Recent Comments
0 | Leave a Comment
"Thanks, BrowserPhil ... so embarrassing. Aravis was from The Horse and His Boy, right?"
Paul Asay Narnia Comes to ‘The Falcon and ..."
"Please replace Aravis with Jadis. :-)"
BrowserPhil Narnia Comes to ‘The Falcon and ..."
"I know that the first film on this list not explicitly about Christian faith, Denis ..."
Robert Charles The 12 Best Non-Christian Christian Movies ..."
"The author, starts the article with a dismissive/arrogant affirmation unto all that are worthy to ..."
oscar deltoro ‘I’m Just Fascinated by It.’ Morgan ..."
Browse Our Archives
get the latest updates from
Watching God
and the Patheos
Entertainment
Channel
POPULAR AT PATHEOS Entertainment
1