The Quiet Faith of Greyhound

Tom Hanks’ new movie Greyhound takes place during what Winston Churchill called the Battle of the Atlantic, a six-year contest between Allied and German forces to control the ocean linking war-torn Europe and the United States’ bustling factories and resources.

But it’s also about a captain—Commander Ernest Krause (played by Hanks), who helms a boat nicknamed Greyhound and leads a handful of Allied destroyers as they shepherd a convoy of merchant vessels through hostile waters. And in a way, it’s about the captain’s faith, too.

Krause has never led a mission like this. That’d be reason enough for a little anxiety: Anyone who’s been promoted into management knows the touch of nerves that comes with it: It’s one thing to carry out orders, another to make them. And in Krause’s case, a wrong decision won’t result in a missed deadline or a dip in income: It could mean someone’s life.

Lots of lives were lost in those waters in 1942, when Greyhound is set. Control over the Atlantic was very much in doubt. German U-boats sank thousands of tons of cargo most every day. And while Krause doesn’t know it at the start of the movie, a wolfpack of Nazi subs lie in wait for the convoy.

Throughout the film, we see Krause struggle with the weight of command. He feels the weight of the crew’s eyes on him. Even though he must make split-second decisions sometimes, we see in that split second the agony of the choice. Sometimes he’s given a no-win decision: Do we rescue a handful of people who would surely drown otherwise, or head back to protect the vulnerable convoy? Each decision, even the right one, comes with cost.

“What you did yesterday got us through today,” one officer tells him after a particularly perilous night.

“It’s not enough,” the captain says. “Not nearly enough.”

Krause’s pressures never relent. But he doesn’t crack. Why not? In large part, it’s because of his deep faith.

We see him pray by his bedside when he gets up for the day. (“Dear Lord, let Your angel be with me, that the evil foe may have no power over me.”) He kneels again before he goes to sleep. (“I thank You, my heavenly Father, that You have graciously kept me this day. Into Your hands I commend myself, my body and soul.”) He says a silent prayer with every meal, his “Amen echoed by George Cleveland, the mess attendant who keeps the captain fed.

Even Krause’s battle plans seem, at times, to be inspired by Scripture.

Greyhound is a harrowing, riveting, PG-13 look at one of the most critical, and overlooked, operations of World War II–one of the best movies released, I think, during COVID. And Hanks has a knack of showing how decency and determination can translate into heroism.

But it’s that thread of faith that I found most interesting here.

Based on C.S. Forester’s 1955 novel The Good Shepherd, Greyhound retains the religiosity that made Forester’s hero, Commander Krause, so compelling.

Few things are more powerful than religion. For millennia, faith has driven mankind to some incredible achievements and, at times, darkest deeds. And when faith truly takes hold of a person, it can become the most powerful bulwark in a person’s life: A light when all others go out, a hope when you’re in a sea of despair.

Krause doesn’t think that God’s going to miraculously pluck the convoy out of the water and set them gently in a British harbor. He has no allusions of what this trek might bring. He knows that ships could be sunk, people may die, that all might be lost if he doesn’t do his job well. He doesn’t assume that, just because he loves God, God will save him.

Greyhound beautifully depicts what faith looks like for many people. It doesn’t make him a saint. It doesn’t turn him into a judgmental zealot. In the context of the movie, it simply powers Commander Krause to be mindful of his place in the world and more mindful of the people who are depending on him in it. We need to see more faith like this in our movies: quiet, realistic and subtly powerful. 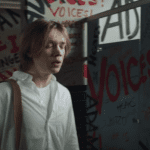 August 24, 2020 Words on Bathroom Walls Reminds Us of the Power of Confession
Recent Comments
0 | Leave a Comment
Browse Our Archives
get the latest from
Watching God
Sign up for our newsletter
POPULAR AT PATHEOS Entertainment
1