The Healing Garden is a Very, Very Christian Movie (For Better and Worse)

I can’t tell you when you’ll be able to see The Healing Garden. My understanding is that the makers are looking for a distributor now. But hopefully it’ll get one, because there’s definitely an audience for a movie like this. It is as stereotypically Christian a Christian movie as I’ve seen in the last few years.

For those who aren’t up on the Christian movie genre, faith-based films tend to follow a formula—as strict as you might find in an Agatha Christie-like whodunit or a schlocky teen horror flick. And while some Christian moviemakers are starting to tell bolder stories and stretch their cinematic wings a bit more, many still seem to try to check as many Christian movie boxes as they can.

This one checks plenty: Untimely death? A couple, actually. Shaken faith? Yep. Wise old folks? Sure. Jerky unbeliever? The actor was a little too likable to be very jerky, but I think he qualifies. Baptism? Of course. Miracle? Boy howdy, is there a miracle. We really needed some sort of football team for this film to truly earn a place in the Christian Movie Stereotype Hall of Fame, but you can’t have everything.

Even the poster has that airbrushed, Hallmarkish, Christian movie type of feel to it. 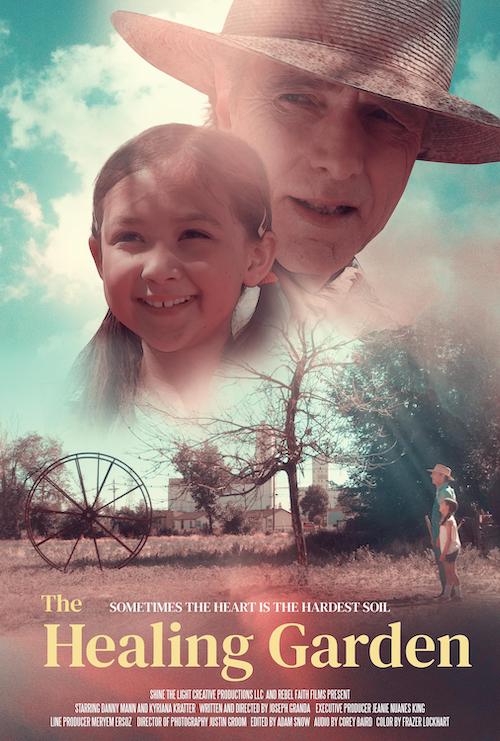 But being an avid reader of Agatha Christie myself, I hasten to add that there’s not anything intrinsically wrong with formulaic stories. It all comes down to how well the formula is realized and who the audience is.

And for a Christian audience, the formula here works pretty well.

The film stars honest-to-goodness actor Danny Mann as Eddie Nichols, a one-time military chaplain who finds himself struggling with his faith after his wife dies. When he moves into a new house and finds a box of discarded Christmas decorations, he sets the plastic nativity set out on his front porch.

“Your Jesus is gone!” a nosy neighbor hollers at him.

“You can say that again,” he says.

But he finds new purpose in a nearby vacant lot. He decides to grow a garden out there (his wife was a great gardener, we learn), and he’s given a little help by (naturally) Hope, a cute-as-a-puppy little girl (played by Kyriana Kratter) who’s dealing with family problems of her own. The two begin gardening, and Eddie starts telling Hope all the Bible stories that he knows by heart and used to love so much.

Naturally, the whole community is changed by this small garden. Naturally, Eddie rediscovers his faith and helps others find it, too. It’d hardly be a Christian movie otherwise.

But the film does have some decent writing tied to it, and it even manages to be intentionally funny. That’s nice to see, since humor and Christian movies often go together just about as well as salmon-frosted cheesecake.

Oh, also: The concept of a “healing garden,” where prayers are literally planted, strikes me as a pretty cool thing, too. The idea of turning over your fears and hurts and watching them not just heal, but be part of something that grows into something better, feels like a potent symbol to me—and one I might mimic in my own garden.

Unfortunately, the metaphorical power of the healing garden here is cut short. Gardens, after all, take time and work and, yes, faith. That’s part of their charm, and their power. There are no shortcuts, and that could be a timely message in a culture that demands most everything instantly. This healing garden, though, loses that lesson in its own quick-fix message.

This is not a movie that’ll likely convince a lot of non-believers to give faith a try. But if you’re a Christian and want to see a saccharine-sweet Christian film, The Healing Garden might be just for you. If you’re a cultural anthropologist that’s interested in seeing what a “Christian film” looks like, this could serve your purpose, too.

For more information on the film, go to healinggardenmovie.com.