‘Stay Prayed Up’ Shows the Power of Gospel Music (and the Gospel Message, Too)

Give the doc its props: Stay Prayed Up is as good as its name. It opens with a prayer, it closes in prayer and it’s filled with prayer—spoken or sung—throughout. As a kid tells us at the very outset, “If you guys love church, this event is really churchy.”

And it’s churchy in the best, most melodic of ways.

Stay Prayed Up, now in limited theatrical release, introduces us to Lena Mae Perry, founder and driving force of the gospel group The Branchettes—so named because their home church was the Long Branch Disciples of Christ Church in Benson, North Carolina. The original group was founded in 1973 and consisted of Perry, Ethel Elliott and Mary Ellen Bennett, with Ethel and Lena Mae performing more than 40 years together. When Elliott died in 2004, Perry kept on singing.

“As long as the Lord let me live,” Lena Mae recalls promising Ethel, “The Branchettes name would keep on a going until I leave here. And that’s what I’m doing.” (In the doc, she’s joined by Angela Kent and fellow longtimer Wilbur Tharpe, who died in 2021, shortly after the movie was made.)

Though Lena Mae Perry’s 83 now, her voice seems as strong as ever—so strong, in fact, that it drew interest from music producer Phil Cook, who (under his Spiritual Helpline label) wanted to record a live album with the group—using his own band, the Guitarheels, as accompanists.

“When they walk in a room, you hit record,” he says in the doc. “When you get the Branchettes in the room, you never know what’s gonna come up.”

While we hear something of Perry’s life, Stay Prayed Up focuses on the week leading up to the record’s live performance. And yes, the Branchettes’ music stands center stage.

But all that gospel wouldn’t be possible without the Gospel. Perry knows it, emphasizes it and draws our attention to it again and again.

Every time Perry sings, she feels God working through her, she tells us. “He got to be in the midst—or I gotta go someplace and sit down.” When she praises her nephew, the Rev. Kenny Nichols, for his own singing talents, her highest compliment also points to his faith. “He’s not afraid to give God Praise,” she says. “He give it all he got.”

We see that spiritual devotion at work when she’s not singing, too. Perry will sit outside on her porch with a phone in her hand, calling people she feels need a little word of encouragement. “I sit sometimes hours trying to let them know that you’re not alone,” she says. She talks honestly of how hard it was when her oldest son died—but how her faith helped carry her through. “I didn’t want to question God,” she says. “’Cause he’s in control.”

Cook tells us that Perry’s been instrumental in his own faith journey. “She’s opened me up so much more, to where I see God every day in so many more places than I did five years ago,” he says.

The music is important to Perry, absolutely. She knows that she and her other Branchettes have been given a gift. But with that gift comes a purpose. And that’s what she seems to especially love about it.

Stay Prayed Up is churchy—but not stiff-collared and straight-laced churchy. Here we see the joy of faith—the reckless exuberance of what it means to love and follow God.

In 2 Samuel 6:14, we’re told that King David “danced before the Lord with all his might.” We get the sense that he couldn’t help it—so full of joy and life he was. In Stay Prayed Up, we get that sense from Perry, too—even at age 83. We get that sense from Wilbur Tharpe, another longtime member, as he plays the piano and smiles all the while. For decades, they made a joyful noise unto the Lord and blessed the lives of countless people, even though most folks outside North Carolina hadn’t even heard of the Branchettes.

Hopefully, with this doc, that’ll change. Because the Branchettes are worth hearing: Both what they sing and what they say.

Stay Prayed Up is in theaters now. And it’ll be available on Amazon and Apple TV July 5. 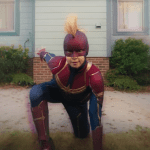 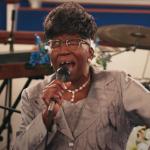