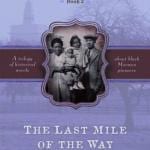 Excerpt from The Last Mile of the Way.

Everything in this excerpt is true as well as Darius Aidan Gray could remember it.
I include a photo of the book with its original cover, because this is Darius’s family. He is the baby.

The setting is Provo, Utah, 1965. I was in fourth grade at Wasatch Elementary School. Darius had no idea what was awaiting him in Provo as he came to study at Brigham Young University.

Aidan was already using credit at the hotel. Barring a miracle, it wouldn’t take long before he’d be homeless. He had to find some way to survive.

Now the Hotel Roberts was no Ritz, but it did have a television room, which was something of a luxury in those days. The railway workers would sit on the overstuffed couches and watch “Bonanza” or “What’s My Line?” Sometimes, a little change would fall from their pockets. The desk clerk gave Aidan permission to go through the cushions after everyone had retired to bed. He could always find at least a penny or two, and soon he had a system for survival.

A penny would buy a stick of licorice—not the hollow, twisted candy we have nowadays, but the solid black molasses kind. A nickle would buy a small Payday candy bar—salted nuts around sweet nougat. A dime could buy either an extra-large Payday or a small one and five licorice sticks. A quarter could keep him fed on these sugary substitutes for up to a week, though there were days on end when he had nothing at all to assuage his hunger.

One evening, he found the grocery ad section of a newspaper and took it to his room. He knelt beside his bed, a notebook and pencil next to the advertisements, and wrote out a prayer:

Lord, I thank you for every good thing you’ve done in my life. I know I count on you for every breath I draw, and forgive me if I sound like I’m pitying myself when I tell you I would sure like a plate of steamed carrots and corn with just the right amount of salt. I would like a big chocolate chip cookie and tapioca pudding, like Elsie used to make. Dear Lord, how I would love to sink my teeth into a T-bone steak and fill my stomach with waffles and Mrs. Butterworth’s syrup, which is only seventy-two cents today at Albertsons. Seems like such a few cents, but when you don’t have a cent, it doesn’t matter if it’s seventy-two or a thousand. I know you understand hunger, and Lord, I am hungry. But you know it isn’t just food I want. You know me better than I know myself, and you understand my need. Lord, I want company, and I pray you for a miracle. I pray for a skillet and two sets of knives and forks and spoons so I can cook up a good meal and share it with some- body—anybody—who’d want to share it with me.

Well, a miracle happened, sure enough. Another Negro man—a Forest Service worker—rented a room at the hotel. He and Aidan became friends with their first handshake, and they made famil- iar conversation. Then this man invited him to the Hi-Spot for a hamburger.

At first, Aidan hedged, for he couldn’t afford a burger, though it cost only nineteen cents.

The forest worker said he’d treat, and Aidan tried not to look too pleased or too desperate. “All right,” he said. “But next time, I’ll treat you.”

He could hardly remember what a burger tasted like, though his nose remembered fine. It could smell the meat cooking from a block away.

At the Hi-Spot counter, a teenager with clumps of mascara around her eyes and lips pale as goat’s milk took their money. She smiled, looked them over, smiled again, then asked, “Excuse me, but are you two Negroes?”

They tried not to look too surprised, then fessed up. “Yes ma’am. We are.”

“That’s okay,” she said. She had a fluty voice and a farmgirl accent. “It’s just I never met Negros before. Only ones I seen are on television. You two seem like nice guys.”

The forest worker stifled a laugh, then whispered to Aidan, “You ever been asked that before?”

When he took his first bite of the burger, all his juices clamored from his belly up. Every cell of him remembered food. He had never tasted anything so fine except his mama’s mustard greens, and he allowed himself to remember one of her meals in detail and to tell his friend about Elsie’s cooking. For the first time in weeks, he ate his fill, and he ate it with good company. 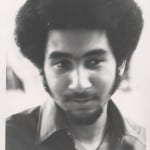 July 20, 2020 Darius Aidan Gray at BYU
Recent Comments
0 | Leave a Comment
Browse Our Archives
get the latest from
The Welcome Table
Sign up for our newsletter
Related posts from The Welcome Table