Resisting the Temptation to Lead by Fear

Resisting the Temptation to Lead by Fear January 25, 2020 Frederick Schmidt

It’s Saturday morning and, as weather fronts collide, our area is being affected by high winds, thunderstorms, and a series of tornado warnings.  Storms are forming west of us and, unfortunately, some communities will be damaged by high winds and, potentially, by tornadic activity.  But the language that is used by the reporters is telling: “Red alert!” “You folks in Cadiz are going to get hit hard!”  One wonders when meteorologists will begin screaming, “Battle stations, rig for collision.”

As in politics and other spheres of our lives, the appetite for cultivating fear and alarm has become typical of our approach to almost everything.  The same kind of language is already characteristic of the reporting that we hear.  Commentators, politicians, and even clergy rely upon the same, breathless urgency.  With increasing frequency, leaders of every kind set dates for the end of the world as we know it, conjuring up opponents who will be “left behind” or consigned to some kind of hell – even if the end and hell are not the stuff of fire and brimstone preaching of another era.

Why has this rhetorical strategy become so common that it has become impossible to know when and where the language of urgency might actually apply?  There may be many reasons.

Are we indulging an under-exercised and genetic capacity for fight and flight?

Perhaps.  We underestimate the power that our genetic history has over the way in which we react to the stimuli around us, and how much that inheritance drives us to find a place for its expression.  Our so-called sophistication and technological prowess might moderate such influences, but they cannot erase its influence and – unexamined – our natural predilections can dominate our behavior.

Are we appealing to the language of urgency too often because we live in an age when it is less obvious what is genuinely a danger to us?

That might be the case, too.  I still remember the conversation with John Housman in film,  “3 Days of the Condor.”  Referring to two World Wars, Houseman’s character is asked, “Do you miss that kind of action, sir?” and Houseman responds, “No, I miss that kind of clarity.”

Are leaders willfully manipulating their followers?

Yes, that too, is also a factor and now – thanks to social media – everyone can play that game and does.  There was a time when the the effort to generate hysteria was confined to our tabloids, but now it is everywhere, and because “getting heard” is more and more difficult – an ever larger number of people are tempted to rely upon it.

Leaders of that kind embody the following characteristics:

Walter Brueggemann notes that we are – according to the language of Genesis one – God’s “viceroys.”  The term is foreign to us, but it describes the delegated authority of one who acts on behalf of a king.  That authority is not a license to do what we want to do but is circumscribed by the king’s priorities and the king’s way of ruling.  It is this realization that centers an effective leader.  It is not always easy to know what is required of us, but the leader who acknowledges this transcendent commitment resists the temptation to lead by fear.

January 27, 2020 Judging Kobe
Recent Comments
0 | Leave a Comment
"Thank you for the kind words!"
Frederick William Schmidt On Being the Church: “Prepared for ..."
"The commentary encompasses so well the entire concept, as our path is made through Paul's ..."
Mary Kathryn Berry On Being the Church: “Prepared for ..."
"You're missing a lot here. 'The Body of Christ" is not a building, or a ..."
Vance Morgan On Being the Church: “Blessed by ..."
"Jesus never said pay little attention to me and my disciples and to my parents. ..."
onlein Jesus never said, “Go make others ..."
Browse Our Archives
get the latest from
What God Wants for Your Life
Sign up for our newsletter
POPULAR AT PATHEOS Progressive Christian
1

What is a Christian Response to...
FreedHearts
Related posts from What God Wants for Your Life 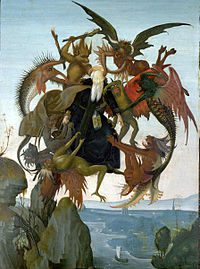 School-boards, mission boards, and the SBC
The new Southern Baptist president, Ed Litton, is a "moderate" only in...
view all Progressive Christian blogs
What Are Your Thoughts?leave a comment
Copyright 2008-2021, Patheos. All rights reserved.