Living in the Hell of White Male Terrorism in America

This week has been a deadly one in America:

And reports of a white male domestic terrorist derailed after the mother of the biracial kids he threatened via Facebook reported his hate to police who apprehended him in his driveway, strapped with weapons, 200 rounds of ammunition, a kevlar vest, and detailed plans to massacre two schools.

I’m not going to spend this piece discussing the fact that each man white male domestic terrorist was apprehended alive and unharmed while Black men are killed by police for having broken tail lights and wide-set noses, though I feel it’s incumbent upon me to note that contrast in how our justice system treats unarmed innocent Black men and white male domestic terrorists.

I’m not going to dive into how this administration’s and its hypnotized disciples’ cis-het white supremacy has demonized, criminalized, and now wants to erase Trans people out of existence.

Nor am I going to spend my time today discussing the demonization of a caravan of refugees who are fleeing the domestic terrorism of Honduras in search of safety and hope here, or the fact that our self-proclaimed Nationalist president believes these people will bring terrorism to our nation, or the disheartening percentage of American Christians who seem to have forgotten that our Christ was himself a refugee fleeing state violence, and descended from a nation who fled state terror and crossed the Red Sea on dry land as a caravan of refugees..

What I want to discuss is hope.

Specifically, how little I have on days like today when I take inventory of a week’s terrors.

Because America does indeed have a terrorism problem, but as we keep finding, it’s not a Muslim extremist problem or an infiltrated refugee problem or a Black problem.

And it’s being fostered and empowered by our president who perpetually Others people and encourages and defends violence against them.

Well first of all, GET OUT AND VOTE.

Secondly, it’s helpful for me to remember that hope is hiding where I least expect to find it.

It’s hiding in the grief we carry together over the loss of life in Pittsburgh and Louisville, in our commitment to solidarity, in our renewed dedication to dismantle white supremacy, in our steadfast faithfulness to cast out darkness by shedding light on truth, in our daily choice to take care of ourselves and each other when we have nothing but hurt, and to celebrate together where we find bursts of Light.

Hope is hiding and salvation is swelling in the middle of all the suffering and hurt. As Elie Wiesel so famously wrote, God is in the Gallows suffering with the oppressed. God’s Godness is on full display in suffering.

A couple weeks ago I wrote a paper for my Thinking Theologically seminary course, about my confusion over what is meant by the confession we recite in the Apostle’s Creed that Christ “descended into hell.”

I’m coming to see that Hell is just the belly of death, the Deep Dark, the hidden, secret place Isaiah talks about in chapter 45 where God transforms the finality of the tomb into a generative womb.

Hell is the place where Life literally comes from Death.

We’re drowning in death lately. So much death and destruction. Death of the earth. Death of bodies. Death of relationships. Constant war, both on international and interpersonal and internal levels.

Truly, we have made and are living in hell.

But it doesn’t have to be scary and hopeless if we rest in the promise that even in the bed of hell, the tomb will be made a womb, and Life will somehow grow in this belly too. 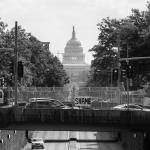 October 6, 2018
Kingdom Building in the Age of Kavanaugh
Next Post 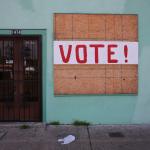 November 5, 2018 Choose Life or Choose Republicans. You Can't Have Both.
Recent Comments
51 Comments | Leave a Comment
"There is no god."
Nixon is Lord Choose Life or Choose Republicans. You ..."
""If there is one person in your life who deserves to walk on the softer ..."
Austin A Decade of Marriage Means I’m ..."
"You celebrated something other than Christmas."
Nimblewill My First Christmas Without Jesus
"what is gaslighting?"
john ramsbottom The Terrifying Call of Christ’s Resurrection
Browse Our Archives
Related posts from Who We Choose To Be with Amy Courts