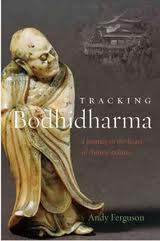 Back in the 1980’s, the scholarly perspective that Bodhidharma was a myth began making the rounds in practice places. Seems like the earliest reports of the old dog that the scholars could find were a couple hundred years after his purported death. I was surprised because … well, I suppose I was surprised mostly because I was young and naive and believed stuff, especially Zen stuff, without much skepticism.

I brought the Bodhidharma matter up with Katagiri Roshi who first hunched a bit, rubbed his bald head, and then said, “Anyway, Bodhidharma’s name is on the lineage papers. Do the scholars say which of the Zen ancestors is a liar? Anyway” (he liked to say “anyway”), “scholars make my head hurt.”

That’s one of the main themes in Andy Ferguson’s new and wonderful new book – Tracking Bodhidharma: A Journey to the Heart of Chinese Culture.

You zennies will recognize Andy as the author of the extraordinarily helpful study resource, Zen’s Chinese Heritage.

This new one, Tracking Bodhidharma, differs from his first book in that you might want to take it along for your summer vacation. Tracking Bodhidharma is part travelogue, part historical detective, part dharma teaching, and part political polemic rolled into one good read.

I refer to Andy above as a “scholarly type” because he isn’t a certified Buddhist scholar as far as I know and that gives him some freedom to speculate – and speculate this dude does. He also presents quite a lot of evidence that Bodhidharma did come to China, maybe when quite young and maybe stayed quite a while.

Andy argues convincingly that the big B and his immediate successors mostly stayed away from the powers-that-were. Andy pumps the “monks don’t bow to emperors” well for some good clear water and shows how old Emperor Wu, who we learn a whole lot about here, championed a version of Imperial Way Buddhism that has had a long succession, including into Japan, Bushido, and WWII.

That gets me wondering what Imperial Way Buddhism is today? How is it that we’re being co-opted by the political and financial powers-that-be and betraying the spirit of the one-leaf-crosser of rivers who was also a nine-year-facing-a-wall guy?

I think it has to do with dharma commodification, the denial of breakthrough because it isn’t convenient, and the rush to change the dharma to fit us. 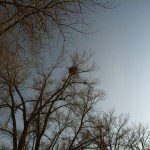