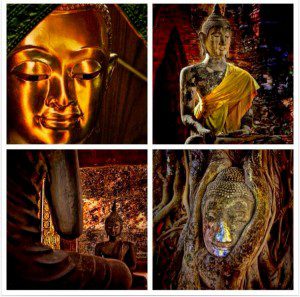 Note: This is the fourth of five post based on talks from Rohatsu 2014. Students (Brian, Ryan, Erik, and Vera-Ellen – thank you!) transcribed them and I edited. The final one will be posted here soon. Click here for the first part:  “The Root of Zen.” Here for the second: “Sitting Through it All.” And here for the third: “Not Clear About the Self.”

For Zen practice, it is vital to become a zazen person and establish your seat firmly, just as the Buddha did. As Keizan says, “…sitting on the indestructible seat, so immobile that spiders spun webs in his eyebrows and magpies built a nest on top of his head.”

Every time we sit like that, we commemorate the Buddha’s enlightenment. And yet this is only a necessary condition to realizing the same mind as Buddha. “I together with all beings in the great earth attain the way.”

This realization, “the transcendence of both sacred and profane,” as Dogen says, depends on the power of zazen. The realization “I together with all living beings in the great earth attain the way” arises from this stable seat and is available to you, whoever you are. That’s the good news of the Zen tradition.

We don’t need to cultivate perfections for eons, but can sit down in this very life.

That’s the first step. If you accomplish this, then, as Keizan admonishes us, “… get rid of ‘you’ and ‘Buddha,’ and quickly, intimately understand this matter of ‘I.’”

This “you” as an object, “Stone drills from the Chin period (see previous post),” is an artifact of unfulfilled ambition. The awareness of the fact that “you” is an artifact of our unfulfilled ambitions, though, doesn’t stop us from still engaging in supportive delusions for that “you” artifact. As we sit, we can see much of our thinking going into supporting the “you.”

However, as we settle into sesshin, thinking becomes soft and subtle. In that subtle thinking we can see the “you” functioning more clearly, supporting the sense of separation between the self and world.

This is the “you” that Keizan encourages us to get rid of. But how to get rid of it? It’s like a piece of bubble gum stuck to the finger, the more you shake the finger the more the bubble gum sticks. Certainly thinking about getting rid of the “you” is just more activity of the “you,” the artifact of unfulfilled ambition, churning out some more discursiveness. We can see it most clearly when the storyline gets threatened, when the “you” we’ve invested so much energy into, is threatened by an alternative storyline. “Oh, no, that’s not me! No! No!”

That won’t do it.

Katagiri Roshi used to liken our rehearsing our stories to a yak licking its tail. Apparently a yak will lick its tail until its tongue bleeds. This is our support of the “you,” support of the self as an object through our discursive processes. So how about just shutting up completely? Yes, we can stop rehearsing all those old stale-bread stories.

Fortunately or unfortunately, when we really shut up and cut off the sources for the continued support of this artifact of unfulfilled ambition, the “you” is still there. The “you” lingers, even as a subtle scent. Although shutting up does provide a little relief, which is nice – the yak can stop licking its tail – ten minutes later or Sunday afternoon when the sesshin ends, someone might say something we don’t like, and there we go again.

Here’s a case in point.

Fayan practiced for quite some time at one of the large state monasteries in China with one of the great teachers of the age, a monk named Ch’ang Ch’ing. In China in those days they had a state-run monastic system and an independent system where all sorts of offbeat and rogue elements could thrive and probably kept the state system rejuvenated through its innovations.

Just as the old monk Gutei raised one finger when asked about the buddhadharma, Ch’ang Ch’ing would raise his whisk. After some years of training in whisk-raising, Fayan and a couple of his companions decided to go on pilgrimage, so they left the large, comfortable state monastery. All three of them had probably been upper class kids leading pampered lives, even as monks. To their credit they left home and went wandering about. They were deep in the mountains, on their way to another state-sponsored monastery, when a big snow storm came up. Fortunately, they happened to see a temple up ahead and some lanterns burning.

Inside the temple, they found a disheveled old country monk, Dizhang. He greeted them and offered them a place close to the fire. Dizhang’s temple was in the independent, rogue system. As the three young monks from the Ivy League monastery were standing around in the country temple warming themselves by the fire, they were chatting about the buddhadharma. Dizhang came up behind them and said, “Hey, I hear you’re talking about mountains, rivers and the great earth. So I was wondering, are the mountains, rivers and great earth the same as you guys or are the mountains and rivers and great earth different than you guys?”

One of the monks said, “Different.”

Dizhang held up his two fingers, chuckled, and went off.

By holding up two fingers, Dizhang indicated to the monk, “You’re seeing the world dualistically.” And, perhaps, “You haven’t passed through the mysterious pivot.”

So you might think that the right answer was to say, “Same.” Let’s see how that plays out.

Fayan was impressed by this old monk and wanted to stick around check him out further. One of his companions, though, said, “I think you are mistaking elephant tusks for a rat’s mouth.”

Nevertheless, Fayan stayed and the other two continued on their pilgrimage, although both would eventually circle back and wake up through Dizhang’s guidance. Our immediate hero, Fayan, went to dokusan every day with Dizhang, repeatedly presenting his understanding of the buddhadharma, but Dizhang would just shake his head and say, “The buddhadharma is not like this.”

Finally, Fayan was cornered so that he could not move and inch. He had found the mysterious pivot. He said, “My words are exhausted, my reason come to an end.”

Dizhang said, “If one were to discuss the buddhadharma, all things would appear in full.” And Fayan was greatly enlightened.

Years later, Fayan began teaching as a successor to Dizhang, not Ch’ang Ch’ing. When the word spread, and his old dharma brother Zizhao (not one of those who had accompanied Fayan to visit Dizang originally) heard the news. That Fayan claimed dharma ancestry with a country bumpkin rathern than their shared teacher, Ch’ang Ch’ing, offended Zizhou. His sense of “you” was under attack.

Zizhao was the head monk at Ch’ang Ch’ing’s old monastery at that time. He gathered up some of his fellow monks, the true successors of Ch’ang Ch’ing and off they went to confront Fayan.

Fayan heard that they were coming and went out to greet them. And, of course, Fayan’s students thought, “Hmmm, this is going to be interesting” so they all followed Fayan, expecting a shootout at the OK Corral.

When Zizhao and Fayan met, Fayan greeted Zizhao as a teacher, bowing to him respectfully. Zizhao said, “I hear you’ve set yourself up here as a teacher. To whom do you succeed?”

Fayan said “I am a successor of Dizhang.”

Zizhao said, “Well, you certainly have turned your back on our late master, Ch’ang Ch’ing.” You certainly betray all the kindness that he showed you through all those years of training with him.

Zizhao said, “Well, why don’t you raise something up, and I’ll explain it for you.”

Fayan said, “Our late teacher said, ‘in the myriad forms a single body is revealed,’ how do you understand that?”

It’s much to the point about the concern about being obliterated by oneness. If the “you” is gotten rid of, is there just annihilation then?

Zizhao raised his whisk, just like Ch’ang Ch’ing would do. Zizhao was not alone in imitating his teacher. Gutei’s student is said to have raised his finger and had it cut off by Gutei. In the key stories of the Zen tradition, there is frequently a play of imitation and authenticity, underscoring for us the importance of both aspects as we find our way in establishing the seat and realizing the truth of the buddhadharma.

It’s unclear at this point, despite his getting ornery with Fayan, whether Zizhao was a master of the dharma or imitating the forms.

When Zizhao held up his whisk, Fayan said, “You learned that at Ch’ang Ch’ing’s place. How about on your part?”

Zizhao just sat silently, stuck, loyal to his teacher to a fault. It’s very human for us to get stuck, so we can have compassion for Zizhao, too, even though he isn’t the Zen hero du jour.

One group of monks said, “Erased”

Fayan just held up two fingers (which is what he learned from Dizhang).

The other group of monks said, “Not erased.”

One of the monks asked, “How about for you, teacher?”

Fayan said, “In the myriad things a single body is revealed.”

December 11, 2015
Buddha's Enlightenment: Not Clear About the Self
Next Post 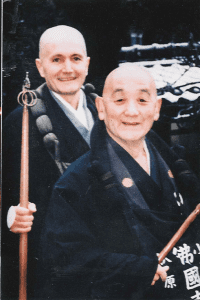 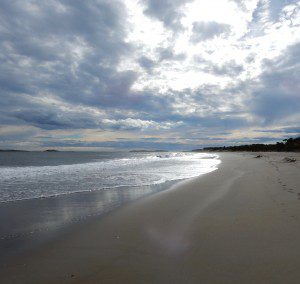 Buddhist
Just Sit or Wake Up? A Tale of...
Wild Fox Zen 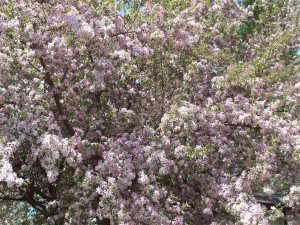