Like Salad With Nasturtium Petals: The Delicious Way of Zen Master Yunmen

In these later days of the buddhadharma, when most of what passes off as “buddhadharma” obscures the vivid truth – the essential nature of the self – it can be useful to study and reflect on the ancient teachers. The traces of their extraordinary development in self-knowledge still flows through their breath in their recorded words.

One such inspiring resource is Urs App’s Zen Master Yunmen: His Life and Essential Sayings, recently republished by the good people at Shambhala Publications. App’s rich introductory material will help the newcomer as well as the old Zen hand appreciate the Zen tradition’s original sources, including the life and teaching of Yunmen.

Yunmen was an extraordinary teacher whose awakened mind flow through his words, even, amazingly, through translation to us today. Indeed, I haven’t spoken to anyone who has dived deeply into the Harada-Yasutani koan curriculum who doesn’t celebrate the teaching of Yunmen.

Yunmen was popular in his lifetime too, a couple hundred years later when the now-standard koan collections were created, through Hakuin’s time (72 mentions in The Complete Poison Blossoms), and, like I said, at least up until today.

Yunmen’s teaching is said to have a three-in-one quality:

1. They permeate heaven and earth.
2. They follow the waves and adapt to the currents.
3. They cut through all streams

True enough but a bit abstract for my taste. I’d say Yunmen’s teaching is like a nasturtium petal salad. 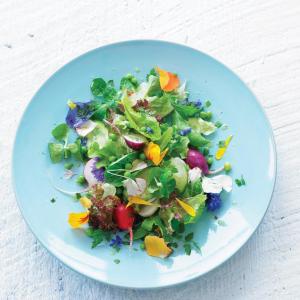 Refreshingly, App encourages the reader to chew thoroughly and go slowly through the text. Indeed, just one passage will do. Like this koan that is popular with John Tarrant Roshi and the Pacific Zen Institute:

(15) “Someone asked: ‘What does “Sitting correctly and contemplating true reality” mean?’
Master said, ‘A coin lost in the river is found in the river.’”

What have you lost, friend, and where you going to look?

Yunmen knew what he’d lost and, like all the great teachers, had a provocative and instructive personal narrative that culminated in finding the coin. One of the first teachers he visited during his search was Muzhou, an old hermit at this point in his life, having studied with Huangbo and then returned to his native place.

(278) “[Master Muzhou’s] one room was usually shut, and it was completely empty. When he occasionally did receive people, he allowed no deliberations. When Yunmen could freely roll in and out, he went straight to Muzhou’s door and knocked.
Master Muzhou asked, ‘Who is it?’
Yunmen: ‘It is me, [Yunmen] Wenyan.’
Muzhou blocked the entrance and said, ‘Why do you keep coming?’
Yunmen replied, ‘I am not clear about myself.’
Muzhou said, ‘Absolutely useless stuff!’
Then pushed Yunmen out and shut the door. In this way Yunmen attained understanding.”

One of the strong positives in App’s text is his generous use of footnotes that help explain his translations. In this case, for example, he has Yunmen stating, “I am not clear about myself.” And Muzhou answering, “Absolutely useless stuff!”

App explains that “Absolutely useless stuff,” is “…literally: ‘stone drills from the Qin period.’ These gigantic drills were fashioned for the construction of a huge palace by the Qin emperor. Since the megalomaniac project was never realized, these tools achieved proverbial status as something that is utterly useless.”

Such footnotes add vital nuance to the utterances of Yunmen and the supporting cast. In this case, the self is not only “absolutely useless” but also a futile, megalomaniacal project.

The Record of Yunmen is not intended to stuff the readers heads full of fake knowledge, bolstering the futile, megalomaniacal selfing project, but to point to the heart of the great matter. App comments, “The problem that drives Yunmen to seek instruction is not something that bothers him but rather his own self. This is not one of a number of problems he has but rather the problem he himself is.”

“You must realize that what is at stake here,” said Yunmen, “does not reside in words and phrases: it is like sparks from struck flint, like the brilliance of flashing lightning. However you manage to deal with this, you cannot get around losing your body and life.”

Yunmen’s teaching is straight to the heart:

This is a nasturtium salad that has had it’s own shit for compost!

(139) Someone asked, ‘What is the pure immaculate Dharma body?”’
Master Yunmen replied, ‘That peony hedge!’
The monk asked, ‘Is it all right if I understand it in this way?’
The Master said, ‘A golden-haired lion!'”

The peony hedge, speaking of the pure immaculate Dharma body, formed the border on the latrine. These are the places where the lion roars.

(20) “Someone asked, ‘What is the place from whence all the buddhas come?’
Master Yunmen said, ‘The East Mountains walk on the river.’”

About this koan, Hakuin said, “If it were me, I wouldn’t say that [East Mountains walk on the river]. If someone asked me, ‘From whence come all the buddhas?’ I would say, ‘A fragrant breeze sweeps in from the south, a refreshing coolness pervades the halls and pavilions (Waddell, “Complete Poison Blossoms from a Thicket of Thorn).”

What is the place from whence off buddhas come?

Around midnight on May 10, 949, Yunmen died. A few hours before, he wrote his death poem:

“Oh! The boat of compassion having been destroyed
Samsara will not attain the shore of salvation.
The Dharma mountain having crumbled
What have flying and walking creatures left to rely upon?”

June 16, 2018
The Language of Dragons: Introduction to Zen Koans
Next Post