Through the Brambles June 18, 2013 Sunweaver

I’ve written before on my Making Light blog about our local Women of Faith group here in Rutherford County, Tennessee, but I wanted to write a little bit about why and how I got into doing interfaith work. Now, I’m not what you might call a big-nosed-Pagan and what we’re doing is not on the level of the big interfaith meetings that people like His Holiness the Dalai Lama attends. We’re little and we’re new, but our work does what those big meetings can’t do. We reach people and congregations on a boots-on-the-ground level. Minds have been changed and horizons expanded over baba ganoush and strawberry pie. 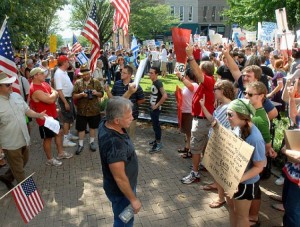 Even as a new Pagan in the late 90’s, interfaith work was important to me. I had become the president of the university student Pagan organization and had the crazy idea that it would be cool to learn more about the other religions on campus and to foster some kind of mutual awareness or support between us. Honestly, I’m not exactly sure what my thinking was then, but we hosted interfaith dinners and invited other groups to talk to ours. There were some successes and some failures and I have no idea whether the organization is still extant, but at the time I felt as though there was a net gain of understanding between my fellow Pagans and those to whom I reached out. If nothing else, my own understanding was expanded and my own skill at interacting with people of other faiths was honed. I learned how to and how not to talk to people who didn’t share my religious ideas.

More than ten years later, the controversy over the building of our local mosque exploded. It was a horrible, ugly mess, but one I couldn’t just stand and watch. Since my stint as the president of the campus Pagan organization, I hadn’t done any interfaith work, but here was a population of people in my own town whose religious freedoms were being threatened for no reason other than some ignorant redneck jerks conflated the majority of Muslims with the ridiculously small minority of extremists. None of this was a shock or a surprise to me, mind you. I’ve lived in Tennessee all but the first four years of my life, so I’ve always been painfully aware of some of the narrow-mindedness of some of my fellow Tennesseans and I know what it’s like to not be a Christian in a blatantly Christian society.

I was overseas for some research when the whole thing exploded in July of 2010, but even from afar, I felt the call right away. I needed to be there to stand with my Muslim neighbors in support. The claims that Islam is “not a religion” and the bogey-man tales of “what they really do” could just as easily have been applied to me and my fellow Pagans. The vandalism and hostility experienced by my Muslim neighbors, especially women wearing the hijab, could just as easily have been directed toward me. Their freedoms, simply put, are my freedoms and there weren’t any Pagans in the area stepping up to speak out in support of our neighbors. 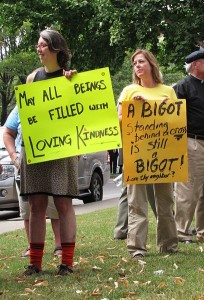 Honestly, I don’t blame them for not speaking up. Every time I was in front of a news camera or a crowd, saying that I’m a Pagan priestess and that I support religious freedom, I was afraid my eldest daughter would be harassed at school or I’d get a brick through my window or some redneck idiot would yell at me. I stood and prayed for justice on the courthouse steps in front of maybe a hundred people or more with news cameras pointed at me and I was scared out of my wits. But my fears, it turns out, have never come to pass and more has come from this than I could have hoped.

My gods lit a fire under me and while I didn’t intend to be the voice of Paganism in Middle Tennessee, that’s what happened. Growing up, I didn’t know what a Muslim even was and now I count several amongst my friends. Our Women of Faith group came together through this controversy and we’ve been able to give back to our community many times in the past three years. We have an annual Ramadan food drive, we’ve collected clothes and school supplies for local children, we’ve sent small tokens of lovingkindness to women who are pregnant and incarcerated in our county, we’ve learned about each other’s beliefs and practices, and now I have no fear.

Getting into interfaith work is not easy. It’s frightening, difficult to talk to people with whom you don’t agree, and difficult to talk about Paganism to a non-Pagan audience, but the end result is worth it. I often say that the reason I’m into interfaith work and the reason that I publicly say that I’m a Pagan is so that no one will be afraid to. But there are ways in which I’m not entirely there yet. I’m a scientist who would like to become a teacher and our schools are not yet as secular as I would like them to be. That’s not a battle I’m prepared to fight just yet. I hope that, eventually, I will be able to be fearlessly Pagan in this part of my life as well and that my difficulty here will smooth the way for someone else coming up behind me.

Interfaith work is a wild garden and walking through it is full of snags and brambles. There are paths not yet forged and I am honored to be able to share my own journey here with you. I hope that by reading about what we’re doing here in Middle Tennessee, others will be inspired to step up and speak out in their own communities as well. May Hermes bless us with eloquent speech and may we be blessed by all the gods as we cultivate our Wild Garden together.

June 19, 2013 Interfaith work from a Pagan perspective
Recent Comments
0 | Leave a Comment
Browse Our Archives
get the latest from
Pagan
Sign up for our newsletter
POPULAR AT PATHEOS Pagan
1