The children all know that it’s time to dread, when in place of “sugarplums” it’s Krampus instead.

The children all know that it’s time to dread, when in place of “sugarplums” it’s Krampus instead. December 5, 2018 Raven Wood

Patheos Explore the world's faith through different perspectives on religion and spirituality! Patheos has the views of the prevalent religions and spiritualities of the world.
Krampus traditionally in folklore is a half goat, half horned demon. With black tufty hair, sharp claws, and a forked tongue, hissing wildly….

His beginnings predate Christianity, thought to be of Alpine and Norse traditions, as well as Germanic roots. Krampus, or “krampen,” in German meaning claw..
Krampus is said to be the son of Hel, she herself being the daughter of Loki, a well known trickster deity.

Krampus’s arrival on the night of ‪December 5th‬, is called “Krampusnacht,” or Night of Krampus. The hooved demon visiting the bad children in Saint Nick’s stead. Some of the lore and artwork depicting the two arriving together, other times Krampus’s appearance being a solitary one.

This dark enity can be heard within the dead of night by the sound of his demon like cloven hooves, his bells and chains thrashing about in the night.
He carries with him birch sticks or ruten, to swat naughty children with, and has a wicker basket strapped upon his back. Using this to transport the children later to Hell….
How wonderfully wicked!

In 1958, Maurice Bruce wrote this of Krampus ~ There seems to be little doubt as to his true identity for, in no other form is the full regalia of the Horned God of the Witches so well preserved. The birch – apart from its phallic significance – may have a connection with the initiation rites of certain witch-covens; rites which entailed binding and scourging as a form of mock-death. The chains could have been introduced in a Christian attempt to ‘bind the Devil’ but again they could be a remnant of pagan initiation rites.

In the 12th Century, the Catholic Church made it’s attempt to do away with the folklore of Krampus, in time artwork changing Krampus’s darkness to red, and a closer resemblance of the devil.
The Austrian government trying again in the 1930’s, neither being successful in their tasks.

Krampuskarten, a European custom of exchanging greeting cards, has been a tradition since the 1800’s. Words of “Gruß vom Krampus” written upon them, translating to Greetings from Krampus. The demon is usually pictured tongue wagging, and eagerly collecting the bad children, but has also been pictured pursuing more curvaceous women as well..

Over time, the representation of Krampus in these European cards has changed. The older versions having a more demonic looking Krampus, while modern versions having a less threatening, almost red cherub type vibe.
So much for progress….

Traditionally it is said to offer Krampus a libation of strong distilled fruit brandy, or schnapps, although I have offered him birch beer as well. I burn offerings of birch and pine resin, and I offer him blackened berries of belladonna.

Recent times and movies have brought this dark demon to a whole new light, his folklore and customs living on for generations to come.

So enjoy the night, and go straight to bed, listen for his bells, and cover your head!
Be well, and be good!!! 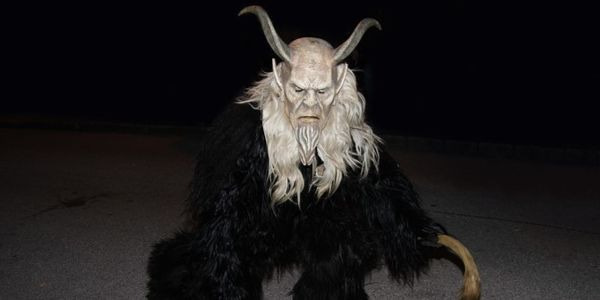 About Raven Wood
Raven is a traditional witch of Celtic and Germanic roots, who lives and practices her craft in the wood. She has currently collaborated with dark occult and horror author Sarah England, in her shadowy thrillers ~ The Soprano, The Owlmen, and Hidden Company. Giving a bit of traditional witchcraft darkness and spell crafting. She is also an author at Patheos Pagan, where she writes the blog "Witch of the Wood with Raven Wood."A blog about magickal folklore, wisewoman herbalism, and traditional witchcraft within the wildwood. Her first book is in the works. You can read more about the author here.
Previous Post 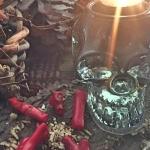 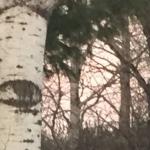 February 22, 2019 Bewitching Birch... A Tree of Many Magicks, and the Devil
Recent Comments
0 | Leave a Comment
Browse Our Archives
get the latest from
Witch of The Wood with Raven Wood
Sign up for our newsletter
POPULAR AT PATHEOS Pagan
1

I’m Reinventing The Pagan Wheel (Of...
Manic Pagan Dream Grrl
Related posts from Witch of The Wood with Raven Wood 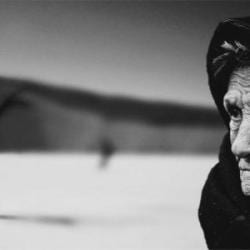 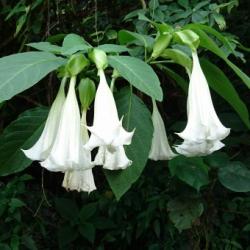 Pagan
The Wortcunner, the Witch, and the Plant Spirits
Witch of The Wood with Raven Wood 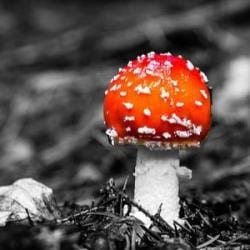 Pagan
Shrooms, and the Shaman... Winter Folktales
Witch of The Wood with Raven Wood
TRENDING AT PATHEOS Pagan