Don Trump is out. Don Quixote is in. Worldly success is out. Regard for others is in. That’s the analysis of this Working Catholic blog no matter what happens in the polls or in state primaries. It’s percolating; though it is not evident to many of the new tycoons, or to so-called celebrities or to many in media. It emerged after the collapse of our individualistic marketplace in 2007-2008. It temporarily resides in both the disillusionment and the dreams of many young adults. Soon it will guide young adult behavior—not all of them, but at least the powerful 2% who will, in turn, change the world.

Young adults—in ones and twos and eights—are seeing through the gimmickry culture of corporate Amazon, of the phony success of ragged individualists and the selfish privileges of the media’s darlings of the moment. Instead, they seek something that Don Trump can never have: credibility. That’s why young adults are attracted to Pope Francis in whom they sense an alternative worldview. That’s why they get involved with causes like Fight for $15 or Black Lives Matter; why they look for jobs with NGOs or in city schools or among the intellectually disabled and the like. They don’t have all the specifics yet. They are at an ambivalent stage. But many young adults, in whole or in part, increasingly feel that the pursuit of wealth in itself is no longer exciting and worth their total investment.

Aristotle (384-322 BC) wanted his students (and all young adults) to make a lifestyle out of their sporadic positive impulses. It happens, he said, as people acquire virtue. To do so requires progress on parallel rails. On one rail are, in Aristotle’s term, intellectual virtues. They come by way of theatrical productions and by reading literature, history and biography. Try Les Miserables by Victor Hugo (1802-1885). Its protagonist, Jean Valjean, is continually misunderstood, loses all his possessions, and is accused of terrible deeds. He is someone Trump might scorn. Try any novels by Charles Dickens (1812-1870). The heroes, though flawed, are the children and workers that the Scrooges of this world rob of dignity. Go back a long way and read about St. Francis of Assisi (1181-1226), using one of the handful of newer biographies that leave off a sugar-coating. Francis was born into privilege, then inwardly he was conflicted and then he spent several years in downward mobility. And then there is the other Donald, the total flop who tilts at windmills in the novel by Miguel de Cerantes (1547-1617). If the nearly 1,000-page Don Quixote seems forbidding, try a similar story by Graham Green (1904-1991), Monsignor Quixote. On Don Trump’s TV show, Don Quixote would surely hear, “You’re fired!” But to describe him as a person who doesn’t succeed is, of course, to miss the point. He takes the scenic route to unassailable dignity; he fails big but with a pure heart. On Aristotle’s other rail are the moral virtues. These, he said, are acquired only through habit.

According to Aristotle, it does little good, for example, to participate on Saturday in an anti-hunger walk. The key is to volunteer at a food pantry the following Saturday and then next month to look for a career with an NGO involved with community improvement. There is a tension between how things are now and how idealists want things to be. Put it all together a young adult needs a friend. Not someone on social media, but someone who, over coffee or beer, will reflect on this tension. Those two friends then need the steady companionship of four or five others—people who want to stay in the tension between how things are and how they could be and friends who want to realistically act on behalf of how the world could be.

It is not easy because mainstream culture is no longer based on face-to-face solidarity, on neighbor-to-neighbor community. For now the way has to emerge among young adults one adventure to the next, one Sancho Panza and Don Quixote duo at a time, one small group here and another there. No matter. Trump and what he represents are done. You read it here. 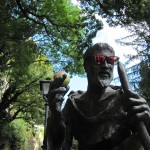 October 26, 2015 NRA Is a Front
Recent Comments
0 | Leave a Comment
"Bill-I observe that subsidiarity/localism is actually a big issue. Some of the alienation that is ..."
Chicagoan Localism
"l think that this commentary by Bill Droel offers a perspective that can help the ..."
Chicagoan Turning To Politics
"Droel commits the sin of lying to the innocent and unable to defend themselves. He ..."
I Love Libertarians Strikes
"I propose that the best way to help working class people in the US is ..."
bill wald Extreme Capitalism
Browse Our Archives
get the latest updates from
The Working Catholic
and the Patheos
Best of Patheos
Channel
POPULAR AT PATHEOS Faith and Work
1