A New Approach to Teaching Religion

High school world religions curricula should not only focus on a religion’s texts, doctrines, and rituals, but also on how the different religions are practiced today.

In a recent essay for Routledge Research in Education and Religion, Dr. Henry Goldschmidt, Director of Education Programs at the Interfaith Center of New York, argues that teachers can promote an understanding of religious diversity through the study of each religion’s contemporary politics, culture, and public discourse.

Some historians and religious scholars refer to this focus on current practice as the study of lived religion.  The slide below that Dr. Goldschmidt developed for a webinar compares the Lived Religion model to the World Religion curriculum. 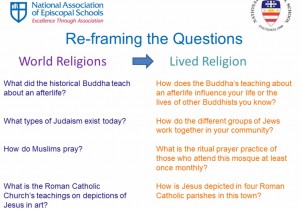 Activities that promote the lived religion curriculum include site visits to local houses of worship, and the inclusion of novels, films, and memoirs that deal with religion. In addition, Goldschmidt suggests that students might research the religious diversity of their school, or visit a museum exhibiting religious themes.

Dr. Goldschmidt teaches the Lived Religion model to both teachers and students at the Interfaith Center of New York (ICNY).

This summer, for example, he’s offering a three-week workshop at Union Theological Seminary in New York City. It includes site visits, discussions, lectures and reading. Applications are due March 1st and stipends are available from The National Endowment for the Humanities 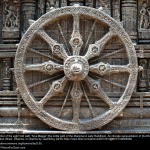 January 30, 2016 The Many Meanings of Dharma
Recent Comments
0 | Leave a Comment
"Wooow. I love your articles a lot. Are you also searching for Cheap nursing writing ..."
Caroline Diseen Happy Birthday Ganesh! Resources
"I am a college student look to teach a religions of the World class in ..."
Susan Alverio Students Tackling Hate Speech
""Christ suffered for our sins once for all time.He never sinned,but he died for sinners ..."
Nahid The Christmas Message That All Faiths ..."
"The difference between Christianity & every other faith in the world is that all other ..."
Nahid The Christmas Message That All Faiths ..."
Browse Our Archives
Related posts from World Religions

Stacks of Wheat
So many thought Monet was making it up, imagining wildly how things...
view all Interfaith blogs
What Are Your Thoughts?leave a comment
Copyright 2008-2021, Patheos. All rights reserved.