The Ascent of Woman

How did the role of women change over time?

That’s the question that historian Amanda Forman tries to answer in this terrific documentary series from BBC. It’s available now for streaming on Netflix.

Forman’s tries to answer three questions throughout the series: why did civilization become almost exclusively male, why have almost all civilizations put limits on women’s sexuality, movement and liberty, and what makes the status of women so susceptible to the dictates of politics and economics.

The first episode called Civilization begins about 8000 years ago in central Anatolia in the early neolithic settlement of Çatalhöyük. Archeologists believe that this early society had no social hierarchy and that women were equal to men. They see no evidence of a ceremonial center or “chiefly house.” Indeed all the houses are similar in size and height signifying no one enjoyed a special status. In addition, burial sites show that women ate the same diet as men and did similar labor as men because of the wear and tear on their bones. They also show communal ties, but not blood ties, suggesting that the idea of family might have been very different.

In addition figurines, particularly the so-called seated woman of Çatalhöyük, suggest that some women might have served as deities. Forman wonders if a woman, rather than a man, might have been god in early society.

But nowhere did the role of change so much as it did in Greece. Here, according to one historian, women were restricted as much as the Taliban restricts women today.

This first episode is ideal for students. It’s a great review of classical history and clearly demonstrates the graphic changes in the status and role of women over time.

The three other episodes in the series includes Separation, Power, and Revolution. Here’s the  trailer for the series and below that a two minute clip from Civilization. 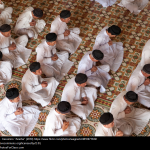 March 20, 2016
A Cultural Approach to Understanding Religion
Next Post

April 16, 2016 Critics Want us to Change What We Teach & Write about Hinduism
Recent Comments
0 | Leave a Comment
"Wooow. I love your articles a lot. Are you also searching for Cheap nursing writing ..."
Caroline Diseen Happy Birthday Ganesh! Resources
"I am a college student look to teach a religions of the World class in ..."
Susan Alverio Students Tackling Hate Speech
""Christ suffered for our sins once for all time.He never sinned,but he died for sinners ..."
Nahid The Christmas Message That All Faiths ..."
"The difference between Christianity & every other faith in the world is that all other ..."
Nahid The Christmas Message That All Faiths ..."
Browse Our Archives
get the latest from
World Religions
Sign up for our newsletter
Related posts from World Religions

Of the Earth
by Thomas Schenk In his book, The Saviors of God, Nikos Kazantzakis writes: “Earth...
view all Interfaith blogs
What Are Your Thoughts?leave a comment
Copyright 2008-2021, Patheos. All rights reserved.