My five point 2016 manifesto as a dissident, rebellious and awkward Jew

I’m setting out my stall for the year as a digital Jewish activist focusing on Israel/Palestine.

Whether I like it or not, my religion, identity and cultural inheritance means this particular conflict is my problem. I can either attempt to ignore it (not easy) or do something about it (also not easy).

So, here’s my personal manifesto as a dissident, rebellious and awkward Jew in 2016.

I hear and read the following sentiments a great deal:

Jews committing atrocities? No way! How could that be? Maybe the odd fanatic or hothead but every nation has that problem.  Israel has the most moral army in the world and we are the only democracy in a tough neighbourhood. All we have tried to do is build a nation to give us safety and security. And all we have received in return for our efforts is hatred and terror.

A Jewish State insisting on enduring innocence and eternal victimhood looks less and less tenable as each year goes by. As does the uncritical support of Israel by Jewish communal and faith leaders around the world. But it’s still a remarkably tenacious mind-set.

I’m reminded of this quote from Martin Luther King:

Nothing in all the world is more dangerous than sincere ignorance and conscientious stupidity.

As the evidence keeps stacking up that something is rotting in the soul of Judaism the denial gets deeper and deeper. And that makes the possibility of taking a new direction harder by the day.

So this year I will continue to call out the truth deniers, the Israel right or wrong brigade, the head in the sand people, the innocence & victimhood junkies. I will keep reminding them that there is an occupation, there is a siege, there is stolen land, there is one law for them and one for us, there is collective punishment, there are stateless refugees that we created. There maybe two sides in this but only our side has political and military power and international protection. Israel may be a democracy but it’s a partial one and a failing one.

There’s a lot of talk about wanting peace, especially on the Jewish side of things. I’m thinking of all those pro-Israel rallies organised by Jewish leadership groups where the crowds hold placards saying: Yes to Peace/No to Terror.  There you have the whole false dichotomy in a single slogan. We are peace loving, they are hateful. They teach their children to hate, we teach ours to love. If that’s your starting point for making peace and your framework for the conflict then peace is a very long way off and you have some serious homework to do. If you think that Jews are not culpable for what has happened to the Palestinian people you are not ready to make peace.

So I will write with the aim of pursuing a just peace, one that will undoubtedly mean compromises on both sides, but a peace that means more than merely ‘quiet’.

If you’ve spotted a better non-violent means of shifting the political dynamics on Israel/Palestine (even just a tiny bit) then let me know urgently. There’s been no diplomatic peace process worthy of the name for the last dozen years or more. Containment, creeping annexation and slow-motion ethnic cleansing are Israel’s preferred policy approaches. Remember, BDS is a tactic not a religion. It may just work in this situation, don’t bother trying it with ISIS. And by the way, campaigning for human rights for Palestinians is not anti-Jewish, but denying a people human rights certainly is.

So I’m sticking with this strategy…it’s better than knives, guns and suicide bombs. You can read more on my argument for Jewish BDS here.

Perhaps it’s all over for the Judaism that stood for kindness, justice and walking humbly with God. We seem to have swapped all our ploughshares for shiny swords. I hope not but the signs aren’t good. However, we have a mighty big Jewish storehouse of ethical thinking and prophetic action gifted to us across the millennia. We will need to draw on it to find our way back (and forward) from the current moral cul-de-sac we have run down. Judaism mixed with nationalism has brought us to this point in our history, I like to think that Judaism will also show us a way out.  I will keep reminding myself and others of that fact.

It’s rather bleak out there right now with no sign of things improving in 2016. In fact I suspect things will get a lot worse before they ever get better. So I’ll be looking for things to celebrate. Small successes, minor victories. Hopefully these things make a difference, eventually. And if there’s occasionally something to smile and laugh about that’s important too. 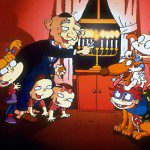 December 2, 2015
Maccabees, Miracles and Grandpa Boris: The battle for the soul of Hanukkah in 2015
Next Post 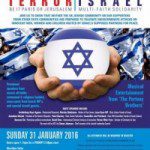 January 20, 2016 The on/off pro-Israel rally that tells us much about the state of British Jewry
Recent Comments
0 | Leave a Comment
Browse Our Archives
Follow Us!

Sukkot: You Don’t Know What You...
Everything Old is New Again
Related posts from Writing from the Edge