Because We Are A Bible-Believing Church III: The Chair of St. Peter 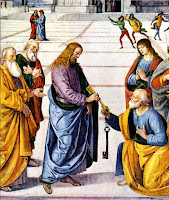 I also was ignorant of the fact that Catholic tradition states that it was on this day that Our Lord made His declaration about St. Peter as being the keeper of the keys.

Consider this one of those “pleasures of finding things out” moments I wrote about on around New Years a few years back. In italics below is a note I found on Catholic Exchange about this day in Church history.  My edits and expansions of additional Bible references are included, but full credit for this post should go to CE.

Rookie that I am, I really, really have a lot to learn about the history of the Church. But I have found that an understanding of history is very helpful as I make my way through this world in other areas.  Why wouldn’t the same be true of Church history?

Today the Church celebrates the feast day of the Chair of Peter. This celebration dates back to at least the fourth century. The Calendar of Philocalus, made in the year 354 and having dates going back to the year 311, marks February 22 for this feast. According to very ancient Western liturgies, February 22 was the date that Christ appointed Peter to sit in His place as the authority over His Church.

When Jesus asks the apostles “Who do you say that I am?” Peter alone replied as follows,

“You are the Christ, the Son of the living God.” Jesus said to him in reply, “Blessed are you, Simon son of Jonah. For flesh and blood has not revealed this to you, but my heavenly Father. And so I say to you, you are Peter,and upon this rock I will build my Church, and the gates of the netherworld shall not prevail against it.

The “chair” of course, is the position, the authority that was given to Peter. This can also be called the Petrine authority or the authority of the pope. Peter, alone among the Apostles, was given the keys to the kingdom. Jesus said to him, “I will give you the keys to the kingdom of heaven. Whatever you bind on earth shall be bound in heaven and whatever you loose on earth shall be loosed in heaven.” (Mt. 16:19) The Apostles would immediately understand, as would any first-century Jew, what Jesus was referring to when He said “keys to the kingdom.” This was a reference to Isaiah 22 where it refers to a king delegating his special authority over his kingdom to his prime minister. In essence, Jesus was setting up His kingdom on earth (the Catholic Church) and he was delegating His authority to Peter to rule over it until He comes again. In giving Peter the authority to bind and loose, Jesus was essentially stating that He would back up the decisions that Peter would make. Of course, the Church teaches us that this does not refer to all Peter’s actions, but in matters of faith and morals, Peter does have the authority to speak for Christ.

And all this despite Simon Peter’s weaknesses and flaws as a regular guy. Our Lord foretells that Peter will deny him. But first, He tells the Apostles this at the Last Supper,

“You are those who have stood by Me in My trials; and just as My Father has granted Me a kingdom, I grant you  that you may eat and drink at My table in My kingdom, and you will sit on thrones judging the twelve tribes of Israel.”

And He singles out Peter with the following information that He prayed for Peter before fortelling his denial of Him,

“Simon, Simon, behold, Satan has demanded permission to sift you like wheat; but I have prayed for you, that your faith may not fail; and you, when once you have turned again, strengthen your brothers.” (Luke 22:28-32)

Christ promised to send the Holy Spirit to guide His Church. This promise is made to guide Peter and the popes throughout the ages, in union with the bishops, in shepherding His Church. Peter, or the pope, however, is the shepherd who watches over the flock until Christ returns. We see this in Scripture also when Christ, after His resurrection and just prior to His Ascension, says to Peter, calling him by his former name (before Christ changed it):

Jesus is our true Shepherd, but He has asked Peter to watch over His flock until He returns to earth. Christ is the King of Kings and He has delegated His authority to Peter and all those after Peter who would sit in the “Chair of Peter” throughout the ages until He comes again in His glory. So Scripture makes it very clear why the Church celebrates this special occasion.

February 22, 2010
In Praise of Polyphony (Music for Mondays)
Next Post

February 22, 2010 Because of What Sin Does
Recent Comments
1 Comment | Leave a Comment
"Vaya con Dios, Leonard; Rest in Peace."
AnonCollie Leonard Nimoy Explains The Origin Of ..."
"Thank you for sharing"
Andy To Break My Fast from Being ..."
"I've seen Matt Maher live four times...twice since this song was released. I absolutely love ..."
Veritas81 WYD Flashback With Matt Maher, And ..."
"Yes, and Dolan should have corrected the scandalous and wrong decison of his predecessor when ..."
sixbunnies Archdiocese of New York Health Plan ..."
Browse Our Archives
Follow Us!