Because of The Stations of the Cross 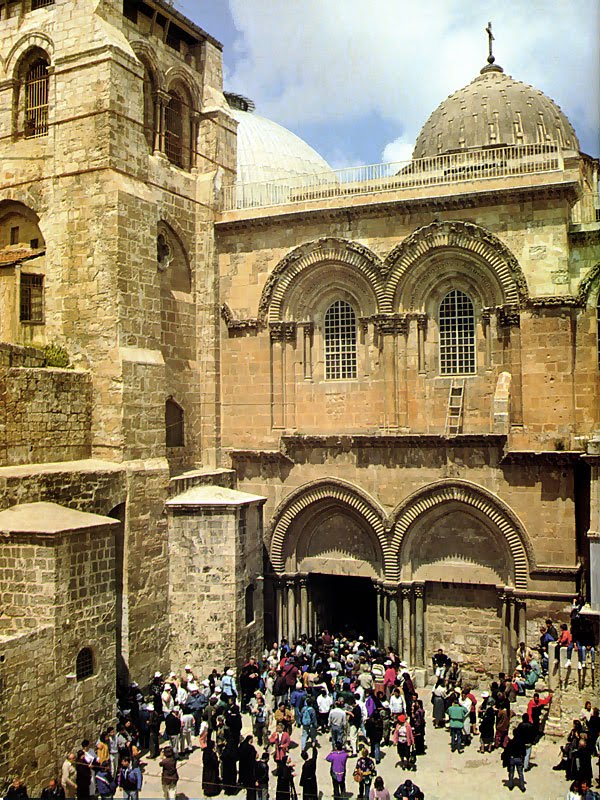 One of the dreams my wife and I have is to go on a tour of the Holy Land. We want to make a pilgrimage there and see the sights and holy places where the greatest story ever told took place. That is a trip we are really looking forward to.

There are many sites outside of the Holy Land to make a pilgrimage to as well. Lourdes, Fatima, and Guadalupe come to mind. So many places, so little time, and dare I say it, so little cash. But there is a way to go to the Holy Land this week right in your local parish. 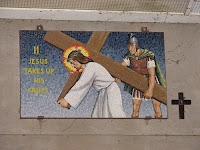 The Stations were originally performed many centuries ago by Christian pilgrims who visited the Holy Land and the sites of Jesus’ Passion. Promotion of the devotion to the Stations began in earnest with the Franciscans, who were given custody of the Holy Places in Palestine in the 1300s. Countless Catholic Christians have enriched their spiritual lives with this powerful devotion, and I am happy to be included in their number now.

In a nutshell, The Stations is a devotion to the Passion of Our Lord consisting of prayers and meditations on the fourteen events experienced by Jesus on His way to and during the Crucifixion. The devotion originated in the late 4th century when pilgrims flocked to the Holy Land from all parts of the world to visit the land of Jesus. Heading the list of places they visited was the Church of the Holy Sepulcher, which was built by the Emperor Constantine  in 325-335 AD atop Calvary, as well as the tomb of Jesus. Processions of pilgrims to this church were common then and now.

During the time of the crusades (1095–1270), it became popular for pilgrims in the Holy Land to walk in the footsteps of Jesus to Calvary. After the Moslems recaptured the Holy Land, pilgrimages became too dangerous. As a result, the Stations of the Cross became a popular substitute pilgrimage throughout Europe.

Originally done only outdoors, the Stations were allowed inside churches in the mid-18th century. Eventually fixed at fourteen, the Stations soon became a familiar feature in all Catholic churches. They place you at the scene of Our Lord’s Crucifixion much as the old You Are There television series did for historical events.

The devotion may be conducted personally by an individual, making their way from one station to another and saying the prayers, or by having an officiating celebrant move from cross to cross while the faithful make the responses. I heartily recommend this second method, with your parish priest as celebrant and like-minded parishioners in attendance. And the kids? Bring them if you have them! Just as Webster experienced when he was teaching his CCD class how to pray the Rosary, your children will amaze you with their recognition of the holiness of this devotion.

In our parish, the Stations are conducted every Friday evening during Lent after the Lenten Dinner. The dinner and the devotion are hosted by a different parish ministry each week.  I served in the scullery when the Men’s Ministry hosted the dinner, and I was one of the readers of the devotion (the 13th Station) as well.

One of the reasons I became a Catholic is that I want to live my faith life out not only in a spiritual way, but in a physical way as well. This is especially true during the Lenten season, when we are fasting. Devotions such as this are one of the defining differences in my life that I desired when I became a Catholic Christian. This devotion in particular has deepened my understanding and appreciation for what Our Lord endured for the benefit of all mankind.

In the long run, my wife and I will keep saving a little bit here and there for that chance to make a pilgrimage to Israel in the future. In the short run, we’ll be heading to the Holy Land via our parish church. I hope you will take advantage of this opportunity too.

For more on the Stations of the Cross, go to New Advent.

March 8, 2010
Because Breast is Best (in honor of International Women’s Day)
Next Post

March 9, 2010 Because Catholics Can Take a Joke
Recent Comments
22 Comments | Leave a Comment
"Vaya con Dios, Leonard; Rest in Peace."
AnonCollie Leonard Nimoy Explains The Origin Of ..."
"Thank you for sharing"
Andy To Break My Fast from Being ..."
"I've seen Matt Maher live four times...twice since this song was released. I absolutely love ..."
Veritas81 WYD Flashback With Matt Maher, And ..."
"Yes, and Dolan should have corrected the scandalous and wrong decison of his predecessor when ..."
sixbunnies Archdiocese of New York Health Plan ..."
Browse Our Archives
Follow Us!

Go Ahead. Take Down Statues of...
Public Catholic
Related posts from Why I Am Catholic