Because You Can See Christ in Anyone 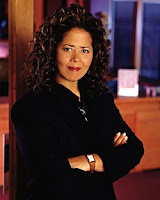 Anna Deveare Smith is an extraordinary actress, teacher, woman. Katie and I had an opportunity to appreciate that last evening at a private command performance put on by a client of mine. I do not know whether the long-time performer on West Wing is a Catholic. But she taught me about being a Catholic, and challenged me to be a better one.

Trained as an actress, Smith is a former winner of a MacArthur “Genius” Grant and is now a professor at NYU. She has created a new form of one-woman show, in which she presents a broad range of American characters as she has encountered them in one-on-one interviews. In the YouTube clip below, you can appreciate her acting talent. But what you might not realize is that each small performance piece is taken verbatim from an interview she conducted.

This makes her performance an extraodinary act of incarnating another person—often someone of another culture, sometimes a person of the opposite gender (she plays Studs Terkel in the first piece). She incarnates these characters with complete acceptance and boundless compassion. She never makes fun of her characters; she embodies them completely.

Anna Deveare Smith demonstrates how it is possible to see beauty, truth, and goodness in anyone. And she has made this seeing and telling her life’s work. Seeing another person this way, I imagine, I am about as close to seeing Christ in that person as I would be face to face with Jesus. Watch, listen, ponder the meaning of this remarkable woman’s work.

Language warning: If you are going to watch this with a young person, turn it off after the piece about the Korean woman. Because the final character, a rodeo rider, uses the F-word. To my mind, even this “lapse of taste” (if that is really what it is) is an act of total acceptance of a character encountered.

March 11, 2010 For the Love of St. Joseph: A Novena
Recent Comments
8 Comments | Leave a Comment
Browse Our Archives
Follow Us!

Communion: The Eucharist Is Paramount To Unity
In Christendom Ecclesiology is looked at in a variety of different ways. ...
view all Catholic blogs
What Are Your Thoughts?leave a comment
Copyright 2008-2020, Patheos. All rights reserved.