Because of Ferrell, My Guardian Angel 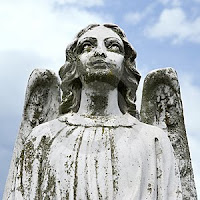 I “met” Julie Cragon a few weeks ago when I stumbled onto her blog, Hand Me Down Heaven. She is a married mother of six and runs a large Catholic bookstore in Nashville, the same store her parents ran when she was in college. We talked about her writing a guest post for YIM Catholic. When she discovered after she’d  finished her post that I, too, had just written about Guardian Angels, Julie worried we’d have to postpone hers. To me, this is just another way God makes connections.

Guest Post by Julie Cragon
A couple of years ago, a few of us at the bookstore were having a conversation a couple about Guardian Angels. Catholic bookstore, spiritual conversations, pretty normal.  I recounted something my mother had passed on to her eight children. She had told us if we said the Guardian Angel Prayer five times before going to sleep, our protector’s name would come to us the next day. The employees and I laughed about the idea, but thought we would give it a try.

That night, before I lay my head on my pillow, I said a prayer to my Guardian Angel. I fell fast asleep. Around 2 a.m., I sat straight up in bed and the name Ferrell came into my head very clearly. And that was all. I lay my head down and the alarm woke me at 5 a.m. At 6 a.m., my mother and I drove to the airport to fly to Chicago to buy products for the Christmas season at our store. On the plane, I told my mom about the name in the middle of the night. She simply said, “Well, he’s it.”  “He’s what?”  “Ferrell’s your guardian angel. Now you can call him by name when you pray to him.” Being a doubting Thomas, I needed more proof. I told my mom if one of the new angels in the Roman showroom, the company to which we were headed to buy products, was named Ferrell, I’d be convinced. My mom couldn’t believe I was making it so difficult.

We arrived in Chicago and were driven to the showroom, where our sales representative was waiting to work with us. After buying for Christmas, we ate some lunch and continued through the huge showroom, meticulously looking at each item. As we were about to end our day, we walked to the front to look at the new Seraphim angels. I said to mom, “If one of these new angels is named Ferrell, then  I’ll believe. Our rep shuffled up to us and asked why we were talking about the name Ferrell.

I told him it was a long story I’d have to share with him later. He said, “I just asked because my middle name is Ferrell. It was my mother’s maiden name and I don’t hear it much. My full name is Jack Ferrell Carmody.” I whipped my head around to my mother, who was already wearing that goofy smile and said, “Okay. Okay. I believe.”

The Catechism of the Catholic Church teaches: “from infancy to death human life  is surrounded by their (the angels’) watchful care and intercession. Beside each believer stands an angel as protector and shepherd leading him to life. Already here on earth the Christian life shares by faith in the blessed company of angels and men united to God.”

Angels work for God as messengers and are here for us to aid in our salvation. They guard and protect us from evil. They are spiritual beings, gentle souls who witness to God’s commands. As protectors, we call upon them for our countries and our soldiers and our children and ourselves. Many of us learned as small children to speak to them in prayer and ask for guidance in our daily lives. May we never be too old or stubborn to ask our angels for help.

April 8, 2010
To Suffer with the Church, with Christ
Next Post

April 11, 2010 For Thoughts Like These on Divine Mercy Sunday
Recent Comments
0 | Leave a Comment
"Vaya con Dios, Leonard; Rest in Peace."
AnonCollie Leonard Nimoy Explains The Origin Of ..."
"Thank you for sharing"
Andy To Break My Fast from Being ..."
"I've seen Matt Maher live four times...twice since this song was released. I absolutely love ..."
Veritas81 WYD Flashback With Matt Maher, And ..."
"Yes, and Dolan should have corrected the scandalous and wrong decison of his predecessor when ..."
sixbunnies Archdiocese of New York Health Plan ..."
Browse Our Archives
Related posts from Why I Am Catholic