Because of First Communions

Over the course of three Saturday mornings this spring, nearly 250 second graders at Saint Patrick’s Parish in Yorktown Heights, NY, will be making their First Communion. A niece of mine is one of these blessed children and I was privileged to witness this special moment in her spiritual life. We Catholics make a big fuss over First Communions and this one was no exception.  Four priests celebrated the Mass and hundreds of family members and friends crowded the sanctuary. Wedged among my own extended family, I felt the presence of the Holy Spirit move through the church and through me during the Mass.

First, a confession: I am partial to traditional church architecture. I like my churches shaped like a cross, with one center aisle. I like them vertical so that our prayers can rise to the heavens. Instead, St. Patrick’s is a barn-like church-in-the-round built in 1984. When I entered the church, I felt distracted. Irritated. I also was tired from my two-hour drive to get there. So I prayed that God would enable me to keep my focus where it belonged: on this First Communion Mass.


Virtually the only natural light coming into the sanctuary was from a long skylight extending from the back of the church to the altar. Because it was midmorning, the sun was bright and shining directly and exclusively onto the center aisle as the children processed in. The girls were decked out in white veils and poofy white dresses, the boys in dark suits with white boutonnières. The sunlight felt to me like the Holy Spirit, lighting the path of their lives.

During his homily, the pastor, Rev. Joseph F. Bisignano, addressed first the children and then their parents. He began by asking the children how many of them believed, without a doubt, that Jesus loves them. All the children but one raised their hands. Fr. Bisignano walked over to the young girl, leaned down and looked her in the eye. “I want you to know, without a doubt, that Jesus loves you,” he told her. He went on to talk to the children about their First Penance and about transubstantiation—the process by which the wheat and wine become Jesus’s body, blood, soul, and divinity. He talked about how Jesus becomes part of each of us every time we take Communion. He explained that this happens not because he and other priests are perfect men, but because they are ordained priests.

Turning his remarks to the parents, Fr. Bisignano made some pointed remarks in the kindest of voices. He reminded them that this First Communion was a result of the solemn promises they had made when they baptized their children in the Catholic faith. He explained that this commitment extended long after the special First Communion day was over. Parents, he said, have promised God that they will take their children to church until the children are old enough to take themselves. “I implore you,” he said. “Don’t let this be their last communion.”


As the mass progressed, the shaft of sunlight danced around the ceiling and walls of the church. By the end of Mass, it had settled on the first communicants themselves, bathing them in light while the rest of the congregation was in shadow. St. Basil the Great, a Doctor of the Church, tells us: “The Spirit is the source of holiness, a spiritual light, and he offers his own light to every mind to help it in its search for truth. By nature the Spirit is beyond the reach of our mind, but we know him by his goodness. The power of the Spirit fills the whole universe, but he gives himself only to those who are worthy, acting in each according to the measure of his faith.”

I love First Communion Masses. They remind me that faith is simple. Jesus loves us. He loves us so much that he gave His life for us. Every time we go to Mass and take Communion, we are letting Jesus enter us and feed us spiritually. We need to be ready to receive Him by striving always to be better people and by confessing our sins. In “Bless My Child,” her Catholic mother’s prayer book, writer Julie Cragon tells us that St. Tarcisius died carrying the Blessed Sacrament to prisoners: Dear St. Tarcisius, Be here with all these children on this special day. Pray with them that they might always hold fast to their beliefs and that the Eucharist may give them the grace they need to join Christ’s banquet in heaven. Amen. 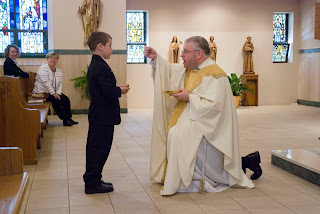 Driving back to New Jersey after the Mass and reception, I asked our 10-year-old son what he remembers about his own First Communion three years ago (left). He shook his head and said he didn’t remember it at all. “But I remember the after-party,” he said.

This remark made me smile for a couple of reasons. First, it told me he understood that his mom and dad had made a big deal of the day. He remembered the two ten-pound pizzas we bought at his request for his party. Second and more important was his reference to the party at our home as the “after-party.” This tells me he understands that the real party happened earlier, at the blessed banquet in which he participated for the first time. God bless every child who experiences a foretaste of heaven for the first time this Easter season.

April 30, 2010 Because the Vocation You Pray For May Be Your Own
Recent Comments
0 | Leave a Comment
Browse Our Archives
Related posts from Why I Am Catholic