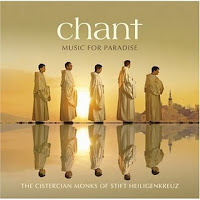 It was the summer of 2008. My wife and kids headed to California to visit family. I would follow them two weeks later for a vacation too (and to ensure they came back to Tennessee with me).

So I was alone in the house for two weeks. It was quiet. When I would come home from work, I didn’t turn on the television, or the radio. I ate, read, and prayed. And I did other things, like cut the yard and feed the dog, and wash the dishes. But as a freshly minted Catholic, I was enjoying the silence and using it to read Scripture, read other books, and learned to pray the LOTH.

I stumbled across an article on the internet that mentioned the album Chant: Music for Paradise put out by the Cistercian monks of Stift-HeiligenKreuz. Say that 10 times as fast as you can. I dare you! By this time, I knew what Cistercians were, I knew that Pope Benedict XVI was a German, and I had taken a few years of German in high school.  So I bought the album and loaded it up into i-Tunes on my Mac.

It’s all sung in Latin and by this time, I actually knew what a few of these songs meant in translation. But not most of them. But I know this: whenever I played them in the house during those two weeks, my soul felt at peace. And the same thing happens when I listen to them know.

What follows are a few selections that I hope you will enjoy. Note: not all are from the album, but i-Tunes is only a click away.

The background on the monastery and how the recording came about.

Spiritus Domini, This is the video Father Karl mentioned above. 459,486 views as of this writing (and counting…)

July 7, 2010 “Master of Beauty” (A Few Words for Wednesday)
Recent Comments
0 | Leave a Comment
"Vaya con Dios, Leonard; Rest in Peace."
AnonCollie Leonard Nimoy Explains The Origin Of ..."
"Thank you for sharing"
Andy To Break My Fast from Being ..."
"I've seen Matt Maher live four times...twice since this song was released. I absolutely love ..."
Veritas81 WYD Flashback With Matt Maher, And ..."
"Yes, and Dolan should have corrected the scandalous and wrong decison of his predecessor when ..."
sixbunnies Archdiocese of New York Health Plan ..."
Browse Our Archives
Related posts from Why I Am Catholic