Because I Believe in Miracles 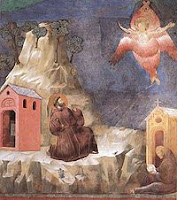 When I was startled into wondering if I could become a Catholic, one thing really stood out to me as a proof of the legitimacy of the Church—the miracles. The Catholic Church believes in miracles without flinching. They even have a standard operating procedure in place to prove or disapprove miracles.

Before I converted, I was a Christian. But I was also a child of the modern age. A rationalist. As a Christian, I believed in miracles and the power of prayer. But it always seemed that this was something to speak of only in hushed whispers. I can only speak for myself here, but the idea of believing in miracles was a bit unseemly.

Old miracles long since accomplished and cataloged in the Bible? No problem there. Sing those long and sing them loud. But modern day miracles seemed to a) not be discussed, b) be explained away or c) just keep that on the q.t., you know, very hush-hush. In contrast, the Catholic Church embraces miracles, past, present, and future.

I couldn’t deny one thing for sure, and that is little ol’ Frank does not know everything. I am not omniscient. Just because I haven’t personally seen something that is documented as having happened, doesn’t mean it didn’t. And I cannot stop God from performing miracles because their explanation is inconvenient either. Besides, hadn’t I thought there were miracles happening all along? Uh-huh, minor miracles of the Websterian variety happening constantly.

Now there are a lot of miracles to consider, and they all are amazing. Eucharistic miracles, apparitions of Mary, miraculous healings, incorruptible bodies of deceased saints, etc. The one type of miracle that really “got me” was the stigmata, aka the wounds of Christ manifesting themselves on a person. St. Francis of Assisi received the Stigmata (see portrait above), as did my favorite Catholic widow, Blessed Marie of the Incarnation. And most recently, in the 20th Century, Padre Pio of Pietrelcina (see photo below) did.

The kicker? All of these miracles, of every conceivable type, occured to Roman Catholics on what seemed to be a pretty regular basis. Enough for me to think that there is really something to them. A little voice in my head said, “embrace the Mystery,” and I became a child again and did.

A little book I found recently is all about miracles in the Church. It is The Question of Miracles written by G.H. Joyce, S.J. I’ve put Father Joyce’s introduction to the book below.

The Christian religion has ever professed itself to be a religion of miracles. Its early documents assure us that a series of miracles ushered in the life of its Founder, and that His public ministry was marked by the continuous exercise of supernatural power. We are told that He pointed to these works in confirmation of His teaching: and, further, that He made special appeal to a crowning miracle—His own Resurrection—which should be for all time an irresistible attestation of the truth of His claims. To that event the Church has ever pointed as the foundation of her belief. Moreover, if the New Testament writings are to be believed, He endowed His apostles with similar powers: and these they exercised in a manner which leaves no doubt as to their reality.

The miraculous element in Christianity is in accordance with its internal character as a religion. For the Christian revelation is no mere ethical system. It claims to be nothing short of a vast inrush of supernatural forces upon the human race, elevating man to a new plane of being, and conferring upon him an altogether new destiny. According to Christian belief, by the Incarnation and the Atonement, man is raised to sonship to God: his soul becomes the seat of a divine indwelling: and through membership in Christ’s body he receives the pledge of an eternal beatitude to which his nature gives him no claim. Thus Christianity as a religion supposes that God has superseded the natural order on man’s behalf. And considered in the light of these truths, external miracle appears but the congruous expression of the tremendous spiritual transformation.

Such, speaking historically, is the relation of the Christian faith to miracles. At the present day, however, the claim is made to hold a “non-miraculous Christianity”—to profess Christianity and at the same time to dispense with all belief in the miraculous. This attitude may be said to be one of the leading characteristics of liberal Protestantism. Among German Protestant theologians it is almost universal. Those who, like Zahn and Seeberg, still hold the historic reality of the New Testament miracles are few indeed—rari nantes in gurgite vasto.

In England the movement has been less rapid; yet every year sees it find more and more support among Anglican and Nonconformist divines. It is the standpoint of some of the writers both in Contentio Veritatis and in Foundations—books admittedly representative of certain aspects at least of Oxford thought. In Contentio Veritatis we are told that to admit a suspension of natural law “would destroy all the criteria both of scientific and historical reasoning.” And in both works we find belief in the bodily resurrection of our Lord rejected on the ground of its miraculous character. Mr. Thompson’s Miracles of the New Testament did but put in plain language what others expressed with somewhat more reserve.

We need not be at a loss to account for this development. The last two centuries have been marked by the rise of several schools of thought, which, notwithstanding their many differences, have at least this in common, that they one and all hold the universe of experience to be a closed system, admitting of no interference from without. With all of them it is a postulate that the chain of causes and effects which experience reveals is never broken. The Deism of the seventeenth century, the Transcendental Idealism of Kant, the Positivism of J. S. Mill, the Scientific Materialism of Tyndall, and the more recent forms of Neohegelianism are at one as regards this. Each of these philosophical fashions has had a wide influence on the thought of the day. And just in so far as a man adopts any one of them, the idea of supernatural interference becomes impossible. Miracles must go. They must go, not because of any new light upon the evidence, but on grounds that are purely metaphysical.

These tendencies have found no foothold within the Catholic Church. In her teaching there is no hesitation or ambiguity. She points, as she has ever pointed, to the miracles of Christ as one of the firmest grounds of our belief in His claims. And she asserts with confidence that the age of miracles is not past, but that God still manifests His power by such events. Nevertheless, since the denial of the miraculous is so wide-spread among our Protestant fellow-countrymen, it appeared to the present writer that there was room for a work on this subject. His effort in the following pages has been to show how untenable are the objections urged against miracles and how overwhelming is the evidence for their actual occurrence.

You can find this book in its entirety on the YIM Catholic Bookshelf.

September 13, 2010 Love: Three Minus One (Music for Mondays)
Recent Comments
0 | Leave a Comment
Browse Our Archives
Follow Us!

Benedict, Sarah, Francis, and the Case...
Steel Magnificat
Related posts from Why I Am Catholic