“Spring” (A Few Words for Wednesday)

Like me, Webster is partial to Gerard Manley Hopkins, a 19th century poet who also was a Catholic convert and a Jesuit. (Depicted here bronze by Irish sculptor Rowan Gillsepie).  Webster has cited Hopkins’s poems  here, here and here.

Poems are meant to be read out loud; this is especially true for Hopkins’s. He used “sprung rhythm,” which is intended to sound like natural speech. (Unlike most poets who use free verse, however, Hopkins made sure the number of feet per line of poetry was kept consistent within a single poem.)

At a funeral I attended Saturday, the celebrant, Msgr. John Mraz, mentioned Hopkins. The deceased, Donald Patton Buckelew, like Hopkins, not only encountered Christ in the Mass, but also in his fellow human beings and in the natural world. What a gift. 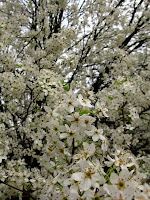 September 7, 2010
Calling All Catechists: The YIMCatholic Bookshelf Is Open
Next Post

September 9, 2010 For Thoughts Like These from John C. H. Wu
Recent Comments
0 | Leave a Comment
"Vaya con Dios, Leonard; Rest in Peace."
AnonCollie Leonard Nimoy Explains The Origin Of ..."
"Thank you for sharing"
Andy To Break My Fast from Being ..."
"I've seen Matt Maher live four times...twice since this song was released. I absolutely love ..."
Veritas81 WYD Flashback With Matt Maher, And ..."
"Yes, and Dolan should have corrected the scandalous and wrong decison of his predecessor when ..."
sixbunnies Archdiocese of New York Health Plan ..."
Browse Our Archives
Follow Us!

Violence, Gaslighting and Flying Monkeys: How...
Steel Magnificat
Related posts from Why I Am Catholic