For Faith In Action: The March For Life (Part II)

For Faith In Action: The March For Life (Part II) January 27, 2011 Frank Weathers

Chapter 3: The Youth Mass for Life.

When the idea to come to the March for Life came over me (see embedded link above), I knew that I wanted to attend Mass before the march began. I remembered where the Wee Kirk on the Hill is, and I also remembered a few other parishes from our trip back in the summer. I went to the March for Life website and clicked on the Factsheet to see if anything was planned worship-wise.

There was a pre-march Youth Mass and Rally planned to begin at 10:00 at the Verizon Center, but I quickly found out that tickets for that event were “sold-out.” Maybe if I would have planned this trip two weeks ago, that might have been a possibility. But the idea to go on this trip was less than an hour old by the time I was looking, so the rally was a no-go. Thankfully, there were four other locations available as overflow facilities.

Three out of the four venues available were sold out too, so I clicked on the last available location, punched in a quantity of 5 and prayed that there were enough spots left for us. There were! I printed the tickets, and the trip picked up momentum from there. Being at the Youth Mass was important for 15, 11, and 9 reasons: those are the ages of my three children and I wanted them to be surrounded by other young people so they would know that this just isn’t some old fuddy-duddy Dad’s idea of something important. I wanted them to see that lot’s of kids were missing school for this important event as well, not just themselves.

And now here we all were, seated and waiting for Mass to begin in a sanctuary packed to capacity. There on the right hand side were a bunch of young men, who turned out to all be seminarians. We sat on the St. Joseph side of the sanctuary, with young men and women ahead of us, and behind us and this was mirrored over on the St. Mary side of the aisle as well. It was 1030, packed, and young people were still coming in by the bus load. The Mass started 15 minutes late so the latecomers and stragglers could make it in on time. This gave me a little time to think and to pray.

I thought to myself, It is entirely appropriate that we are sitting here in a church in Chinatown. Outside, next to the front entrance to the church, I had spied a sign written in Chinese that had Our Lady of China’s portrait on it. John C.H.Wu and Dom Lou Tseng-Tsiang must be smiling, I thought to myself. They were probably clucking their tongues at me for my worrying that we wouldn’t make it here on time. “Silly Grasshopper, oh ye of little faith.”

I remember several things from the Mass, the first of which is that we began it with the long form of the penitential rite as follows,

Catholics believe that some forms of sin are graver than others, because frankly, this makes sense. Also, it says so in the Bible. But we also know that we are all sinners, and though we hate the sin, we love sinners, because Christ loved sinners too. So it is apropos that we acknowledged our sins before all present and to ask for their prayers for us as well. It always is appropriate. 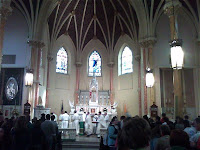 Next, Our Lord, of course, was present in the Mass, as He always is. Sometimes I can slip into taking this for granted, but not today. He had eleven of His priests there as well, to concelebrate the Mass for His flock, and provide them with nourishment from Him. And at the Great Amen, all eleven of the priests chanted in unison,

Through Him, in Him, with Him, in the unity of the Holy Spirit, all glory and honor are yours Almighty Father, forever and ever.

And all of us in attendance chanted back, Amen.

It was a moment so beautiful that it made my eyes water. I thought to myself that even if we couldn’t have made it to the March later, being here now, for this Mass alone, was well worth the trip.

The sanctuary reverberated as we prayed the Our Father together, and there was much joy as we exchanged the sign of Christ’s peace with one another. Several hundred of us united in Christian charity for the sanctity of human life. By the time the final blessing and dismissal came, Go in peace to love and serve the Lord, and our thunderous reply of, Thanks be to God! I thought how fitting to remember that in everything we do, we serve the King and His peoples.

It may have been freezing outside (it was!), but as the warmth of the Holy Spirit washed over us, it was like the little tongues of flame from Pentecost were there to follow us out into the cold and keep us warm. It was 1145. Time to take the Metro to the rally point on the Mall.

Chapter 4, the Mall and the March

After leaving the Mass, we walked back up to where we parked so we could get a few items before heading to the Chinatown Metro station. If it would have been Summertime, we could have just walked from Chinatown to the Mall. But as it was 20 some odd degrees, temperature wise, the Metro option was looking good. We knew where we were now, because during our vacation this past summer, we had eaten at a restaurant close to the Chinatown Metro station, a block away from where we stood now.

My wife remembered how to work the ticket machines too. As we were going down the escalator to the train, a bunch of college students carrying life affirming placards and signs were going up the escalator. I told my kids that they were either lost, or meeting some of their friends, because they were headed the wrong way. I don’t think they believed me. As we only had to go down one stop to Archives/Navy Memorial I started thinking about lunch ideas.

When we got off at our stop, it was 1215. Now, the rally at the assembly point was starting up, but I knew that the march itself didn’t begin until 1330, so it was time to have some lunch. My wife and I discussed going to the Old Post Office, where there are plenty of food vendors, or to a restaurant close by. Lots of our fellow Pro-Lifers were walking around and lining the streets already, so we started walking toward the Mall.

The rally point for the March was near the National Gallery of Art, and as we neared it I recalled that there was a cafeteria underground between it and the Gallery of Modern Art. No one appeared to be heading towards the Gallery so, being the contrarian that I am, that is where we headed. The guards checked our bags and we were warm and inside, headed to bathrooms and then on to lunch. We even got to snap a few more photographs of some beautiful paintings again.

We took the elevator downstairs to where the shops and cafeteria were. I issued orders that the kids could order all they wanted, but that they would have to eat all they took. My oldest said, “wait, is this where we came that time and we all ordered too much?” And I said, “yes, this is where you guys broke me last summer. Be gentle this time!” And they were. We sat across from the water fall and noted other marchers that were also here for lunch. More than a few priests wearing their collars were evident as well.

As my wife and I ate lunch I commented, “You know, it’s as if that whole trip last summer was a preparation for us coming here now. As if that was a reconnaissance or pathfinder mission just so we would be prepared for this trip.” She nodded in agreement and said, “It seems that way, doesn’t it. It’s a blessing that we knew where to eat, where the Metro stations are, and everything.” By now it was 1315, so we wrapped up our lunch, headed to bathrooms again (where we saw actual working phone booths!) and then ventured back out into the throng of peaceful protesters just like ourselves.

There were people from all over the country, as well as from all over the world here. Why from the world? Pro-Life solidarity, I reckon. We saw German, Italian, and Irish flags for sure. We saw Orthodox Jews, Orthodox Christians, Episcopalians for Life, Lutherans for Life, and lots and lots of Catholics. I’m sure there were many other churches present as well. What I didn’t see were any Pro-Abortion supporters at all. Maybe it was too cold for them? I don’t know.

We even saw an Anarchist/Agnostic for Life though, which makes sense because if you think that being Pro-Life is only because of our religious beliefs, you don’t have your thinking cap on. I was Pro-Life long before I became a Catholic because killing babies can just never be justified. Not if you use your ability to think and reason. A humanism that feeds off of the deaths of other human beings is a Soylent Green type of future that I don’t find appealing at all.

For the rest of this post, I’ll let the pictures do the talking,

We got back to the car, and got back on the road for the return trip home. I made it as the pilot all the way back to Roanoke. There, we refueled and I handed the tiller over to the XO. We arrived back home at midnight, safe and sound. 36 hours from the beginning to the end. A minor miracle in itself.

To God be the Glory!

* All photographs belong to the author.


An Apology from the Baby Boomers.

“The Kid” went to the March and posts on it here.

And “the Kid” made a video too. Help us make it go viral!

January 26, 2011
Thanks to Hundreds of Thousands Who Answered the Cries of the Christians in Iraq
Next Post

January 28, 2011 Thanks To Everyone!
Recent Comments
0 | Leave a Comment
Browse Our Archives
get the latest from
Catholic
Sign up for our newsletter
POPULAR AT PATHEOS Catholic
1

Clarifying Catholic Teaching on Vaccines re:...
Through Catholic Lenses
Related posts from Why I Am Catholic