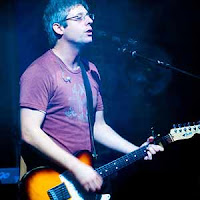 A while back, I did a music post on Matt Maher, the Catholic Contempory Christian artist. Maher and his band are top notch, and I hope to take my kids to one of his concerts if he ever wanders our way.

Here’s why I like his stuff. As Christians, we should measure the worth of an artist by how well they get “it” right about the human condition, don’t you think? Some of us go searching for “it” in music.

Now think of this as Christians walking around holding a tuning fork in our hands. Sometimes, popular contemporary artists will sing a song that appeals to us for all the right reasons, and the tuning fork will sing too. Most often though, they miss the mark.

Not so in the case of Matt Maher. This dude, and his band, is always on the mark and the tuning fork is constantly humming. At least that has been my experience. So for this weeks set, we start up with a couple of knock-out songs from him that should have you running to the i-Tunes store pronto. Then we’ll wind our way through a few post-related songs and wind up with a violin and a piano.

Matt Maher, Love Comes Down. I’ve been listening to Matt Maher’s Alive Again album for my “commute to work” music lately. I heard this one this morning and I hit the repeat button at least three times. I can’t get the song out of my head, and you know what? I don’t want to either.

Matt Maher, Flesh and Bone. This is the antidote to P!nk’s current hit called F****** Perfect, which is long on sentimentality, but short on truth. This was shot live at a “Theology on Tap” gig, which I’ve heard of but have never participated in. These lyrics are right on the mark. Great introductory remarks by Matt on our encounter with Jesus.

Ok, I don’t know if the tuning fork will work with the rest of these, but I like them anyway.

Living Color, Cult of Personality. We had a post related to something similar to this just yesterday. I remember this band because it was burst onto the scene around the year I got married. These guys could get loud! One of the best unknown guitarists you’ll ever hear.

Culture Club, Miss Me Blind. Remember Indiana Jones yelling “That belongs in a museum!”? Well, a few weeks ago, the news reported that Boy George was returning an icon to the Orthodox Christian Church on the island of Cyprus. It turns out the icon had been looted from a church there in 1974 and BG bought it from an art dealer in London, unawares. He’s returning it but seriously… who knew these guys sounded this good live? Not me. They jam!

The Bangles, Walk Like An Egyptian. As the situation in Egypt moves towards it’s seventh day of rioting, I am remembering my time there and the songs that we played in the Marine House. By the time this one came out though, I was in Malaysia, but I still liked it. For news on what’s happening in Cairo, look abroad.

John Cougar Mellencamp, Crumblin’ Down. I remember us playing this one a lot in the Marine House Bar in Cairo. John’s singin’ about me being uneducated and having an opinion that means “nuttin.'” That’s it! Tomorrow I’m wearing white socks with my loafers…that’ll show ’em.

Midori, Chopin’s Nocturne in C-sharp. This little lady came to our small town this past Friday. She was the guest of our local symphony orchestra, playing a piece from Strauss. I’ll tell you this…she can make that fiddle sing! My kids said “she moves like a robot” to which I said, “she’s just jammin!” Guess what else? She still uses that little cloth for on her chin rest to this day.

We’ll see you in February!

January 30, 2011
Because the Beatitudes Illuminate our Upside-Down World
Next Post

February 1, 2011 Thoughts On Beauty from Sick Bay On A Tuesday
Recent Comments
0 | Leave a Comment
"Vaya con Dios, Leonard; Rest in Peace."
AnonCollie Leonard Nimoy Explains The Origin Of ..."
"Thank you for sharing"
Andy To Break My Fast from Being ..."
"I've seen Matt Maher live four times...twice since this song was released. I absolutely love ..."
Veritas81 WYD Flashback With Matt Maher, And ..."
"Yes, and Dolan should have corrected the scandalous and wrong decison of his predecessor when ..."
sixbunnies Archdiocese of New York Health Plan ..."
Browse Our Archives
get the latest from
Catholic
Sign up for our newsletter
POPULAR AT PATHEOS Catholic
1