For All the Sacramentals: Crosses and Crucifixes 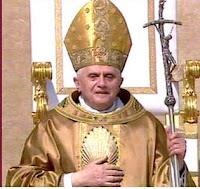 Today I’m sharing more on sacramentals from Fr. John F. Sullivan’s little text book called The Visible Church. What is a sacramental? They are “objects set apart and blessed by the Church to excite good thoughts and to increase devotion, and through these movements of the heart to remit venial sin.”

Today we turn to the symbol that all Christians know, love, and revere.

It is the Cross, the instrument that was used to kill the Son of God. And in this lesson, Fr. John explains the history of crosses, their types, both pagan and Christian, and even the difference between crosses and crucifixes.

The Cross and the Crucifix

The Cross is the most important of Catholic emblems. It symbolizes the redemption of mankind and our holy faith, because Jesus Christ, our Redeemer and our God, died on a cross. It is used on our churches, schools, institutions, altars, vestments, etc., as a symbolic ornament; and when blessed, either as a cross or a crucifix, it becomes a great sacramental of our religion.

Among many nations, in ancient times, crosses were used for the execution of criminals. But even among pagan nations the cross was held in religious honor. The most ancient form was the swastika, emblematic of the revolutions of the sun, and consequently of life. In Egypt and Assyria the cross typified creative power; the Egyptian gods are often represented holding a crux ansata, or cross with a handle, an emblem of the reproductive powers of Nature. In India, Mexico and Peru, crosses were in use with the same symbolic meaning.

The True Cross, on which our Saviour died, is said to have been discovered by St. Helena, the mother of the Emperor Constantine, at Jerusalem, in the year 326, and the Church celebrates this by a festival, the Finding of the Holy Cross, on the third of May. There is also a feast of the Exaltation of the Holy Cross on the fourteenth of September.

A part of the True Cross is said to be preserved in the Church of Santa Croce (the Holy Cross), in Rome, and various other places claim to possess fragments of it or the nails used at the crucifixion.

The Kinds of Crosses 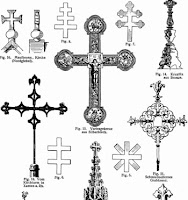 The principal varieties of crosses used in Christian art and architecture are as follows:

2. The Greek cross, having the four limbs of equal length—so named because it was much used in later Greek architecture.

3. The St. Andrew’s cross, in the form of the letter X; that Apostle is said to have been crucified on one of that description.

4. The Maltese cross, having four equal limbs of spreading or triangular form; it was the badge of the military and religious order of the Knights of Malta.

5. The Celtic cross, common in ancient Irish architecture, having the arms connected by a circle.

6. The Tau cross, so called from the Greek name of the letter T, which it resembles in shape.

7. The Egyptian crux ansata, mentioned above. It consists of a cross with a ring or handle.

8. A cross with two cross-bars is sometimes called an archipiscopal cross, or a patriarchal cross, being used in the heraldic arms of these dignitaries. 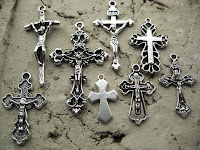 There is a difference between a cross and a crucifix. A cross becomes a crucifix only when it bears an image of our Lord’s Sacred Body. The word “crucifix” is from the Latin crud fixus, fixed to a cross.

The Church requires that a crucifix be placed over an altar on which Mass is to be offered; and during the Sacrifice the priest bows towards it several times. It is used in solemn ceremonies as a processional cross, being carried at the head of the line of the clergy. The faithful are urged to have crucifixes in their homes, and the same, blessed symbol is usually attached to rosaries.

The tablet bearing the letters I N R I at the top of a crucifix is called the “title,” and these letters are the initials of the words “Jesus Nazarenus, Rex Judaeorum” (Jesus of Nazareth, King of the Jews)—the letters I and J being the same in ancient Latin.

On some crucifixes a skull and bones are shown at the foot—reminding us that Golgotha, the place of the crucifixion (Mount Calvary), signified a skull (from its shape or because it was a burialplace)—or possibly from a fanciful legend that in the hole dug for our Lord’s cross was found the skull of Adam!

In our churches, from Passion Sunday to Good Friday, all crucifixes are veiled; and after the unveiling on the latter day the clergy and laity devoutly kiss the feet of the image of our Blessed Lord, to express contrition and gratitude. This ceremony is known as the “Adoration” of the Cross, though we really give adoration only to God. The term is sanctioned by long usage.

To all who after a worthy Communion recite before a crucifix or a picture of our crucified Saviour the prayer beginning “0 Good and most sweet Jesus,” a plenary indulgence is granted, applicable to the souls in Purgatory.

Next time, Part I (of three) on Vestments.

February 19, 2011
For Faith in Action: Live Action and the Lord of the Rings
Next Post

February 20, 2011 Because We Are His Folk: Reflections on Matthew 5:44
Recent Comments
0 | Leave a Comment
Browse Our Archives
Related posts from Why I Am Catholic