For All the Sacramentals, The Sign of the Cross

For All the Sacramentals, The Sign of the Cross February 18, 2011 Frank Weathers 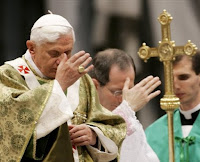 As a convert, when I was first considering becoming a Catholic, some of the little physical things Catholics did were of interest to me. I would think, why do they do that? The Sacramentals were mysterious to me.

I found a little book by Fr. John F. Sullivan entitled, The Visible Church. Published in 1920 as a text book for Catholic schools, it’s perfect for a beginner like me.

In it he explains these sacramentals. Today I present you with the first one in his book and one which I didn’t even consider an official sacramental. As it turns out, it is the most important one. Take it away Fr. John,

The Sacramentals are objects set apart and blessed by the Church to excite good thoughts and to increase devotion, and through these movements of the heart to remit venial sin.

The Sign of the Cross is the most important of the Sacramentals, being a symbol of our deliverance from the power of Satan, and an emblem of God’s mercy manifested through the crucifixion of our Saviour on the cross of Calvary. 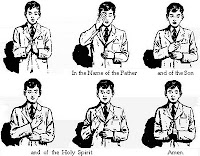 It consists in making a movement, with the hands or with some other object, in the form of a cross. The ordinary method of making the sign of the cross is as follows: Put the right hand to the forehead and to the breast, and to the left and the right shoulder, saying: “In the name of the Father and of the Son and of the Holy Ghost. Amen.”

The words and the action form a summary of our faith. We say: “In the name”—not “names”—expressing thus the unity of God. We mention the three Persons, the Father, the Son and the Holy Ghost, thus showing our faith in the Blessed Trinity. The cross itself, made with the hand, manifests our belief in the incarnation, death and resurrection of our Saviour, and shows that we regard Him not only as God but as man—for unless He possessed a human nature He could not die.

The use of the sign of the cross in Catholic worship probably goes back to the time of the Apostles. In those early days it was usually made very small, by a slight movement of the finger or thumb, so as not to attract the attention of pagan persecutors.

The triple sign of the cross was common in the Middle Ages, but is not now used except at the beginning of the Gospels at Mass. It is made by marking the forehead, the lips and the breast with a small cross, using the thumb; and it reminds us that we should worship God with our minds, our lips and our hearts.

The sign of the cross is used in the administration of all the Sacraments, in all of the Church’s blessings, and at the beginning and end of public and private prayers. In the ceremonies of Baptism it is made fourteen times; in Extreme Unction, seventeen times. In the blessing of holy water it is made twelve times. In the Mass it is used in various ways no less than fifty-one times.

February 16, 2011
A Chinese "Spiritual" (A Few Words For Wednesday)
Next Post

February 19, 2011 For All the Sacramentals, Holy Water
Recent Comments
0 | Leave a Comment
Browse Our Archives
get the latest from
Catholic
Sign up for our newsletter
POPULAR AT PATHEOS Catholic
1