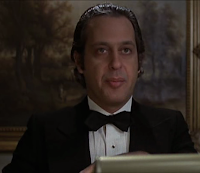 I heard the news today that Alan Rubin, aka “Mr. Fabulous”, has passed away. Rubin was the trumpeter in the legendary, and Vatican-approved, Blues Brothers band.

Here is the official word from the Los Angeles Times obituary page,

Trumpet player Alan Rubin was recruited to join the Blues Brothers after backing up John Belushi and Dan Aykroyd in the “Saturday Night Live” television skits that spawned the band in the late 1970s.

One of many gifted session musicians in the group, Rubin became known for his movie portrayal of head waiter Mr. Fabulous in 1980’s “The Blues Brothers” and a 1998 sequel.

He was a premier New York City session musician who was “sought out for his expertise in playing every style of music — from classical to jazz to blues to rock and disco — authentically and artistically,” the Original Blues Brothers Band said in a statement.

When asked about his professional biography, Rubin liked to say: “Been everywhere, played with everyone.”

Read the rest here. Remember this scene with Rubin?

Here he is backing up Jake and Elwood with the rest of “the Band,” ahem, and the constabulary of the Greater Chicago area. Did I mention the Nazi Brownshirts too? The whole clip is available at You Tube. Below is a snippet.
http://www.wat.tv/swf2/283092nIc0K114958939
The Blues Brothers (Everybody Needs Somebody To Love)2bcalvi Vidéo 2bcalvi sélectionnée dans Musique

Ow…That dude could play. Say a prayer for Mr. Rubin’s soul, and also for his loved ones who mourn their loss. Thanks for the music Alan, and thanks for the memories!

June 13, 2011 To Join the Ayn Rand Busters? To Be A Hero? I'm In!
Recent Comments
0 | Leave a Comment
"Vaya con Dios, Leonard; Rest in Peace."
AnonCollie Leonard Nimoy Explains The Origin Of ..."
"Thank you for sharing"
Andy To Break My Fast from Being ..."
"I've seen Matt Maher live four times...twice since this song was released. I absolutely love ..."
Veritas81 WYD Flashback With Matt Maher, And ..."
"Yes, and Dolan should have corrected the scandalous and wrong decison of his predecessor when ..."
sixbunnies Archdiocese of New York Health Plan ..."
Browse Our Archives
Follow Us!