Because of the Protestant Reformers Beliefs On Mary

Because of the Protestant Reformers Beliefs On Mary August 5, 2011 Frank Weathers

Another Marian post as we are ten days from the Feast of the Assumption. This one was first published back in December of last year.

Back when I first joined YIMCatholic, I was going to write posts about my conversion. I hammered out seven posts in pretty rapid succession and then, I stopped writing them until recently.

Many of my posts now are simply my observations of the world which are colored through the lens of a convert to Catholicism. It would be difficult for them not to be. Other posts I’ve written are of the “look what I just found!” variety, and the “I want to share this with you” type. Call them the discovery posts if you will.

Recently I gave a talk on the Communion of Saints for my parishes RCIA group. Consequently, I’ve been answering questions of potential converts that have prompted me to explain my conversion to others.

Basically, this has resulted in my having become a neophyte evangelist of sorts for the Church. And though this blog space isn’t the forum for heavy-duty apologetics, because others do that better elsewhere, I have always seen my role here at YIMC as one of evangelizing.

Back to my conversion story, when I was first confronting the idea of becoming a Catholic, I had to look hard at the question “Why am I Protestant?” Having just moved cross-country following my retirement from the Marines, I found out that my mother no longer went to church where we had gone when I was growing up. Instead of the non-denominational church I grew up in (and which we were a founding family of), I learned that she now went to a Presbyterian church instead. Hmmm.

Rather than start visiting all kinds of churches, which appealed to me about as much as shopping for a new car, my family and I kept going to the local Catholic parish in our new town while I did research and home improvement projects. One of the first things I looked into was the problem of Catholics and their obviously misguided devotion to the Virgin Mary.

The funny thing is, I had sat in the pews in the Catholic Church with my wife for close to 18 years and I had never really noticed any wacky or overly zealous devotion to Mary. Not at Mass, anyway, and as we didn’t stick around much after the conclusion of Mass, I didn’t see anything that made me uncomfortable. Truthfully, I was surprised about this and it’s probably a big reason why I continued to sit in the pews with my patient Catholic wife for that long a time.

This didn’t stop me from believing that weird Marian devotions were happening though, and I assumed talk of her perpetual virginity was just “crazy talk.” Like most, I had no idea what (or who)  the Immaculate Conception was either and I just thought people were referring to Our Lord’s conception. I was ignorant, plain and simple. But I had in mind a mission to correct the wrong religious track that my family was on so I started planning the military campaign to retake the spiritual territory I had ceded to the Church. My first target was what I thought would be the easiest: Mary.

Before I went on my “destroy Marian Devotion” offensive, though, I knew I would have to do a little homework. Planning ahead, you see, I figured the best place to start was with the guys who picked up the Protestant Reformation football and ran with it for touchdowns. Follow the winners Frank, and victory will be yours!

But get this. Much to my surprise, nay, shock(!) I had to throw a penalty flag on myself and look for a different angle of attack. Because what I found out was that the Big Three “Reformers” all agreed with the Catholic Church’s teachings on the Mother of God!

Here is what I found, courtesy of the site catholicapologetics.info,

Mary the Mother of God

Throughout his life Luther maintained without change the historic Christian affirmation that Mary was the Mother of God:

Again throughout his life Luther held that Mary’s perpetual virginity was an article of faith for all Christians – and interpreted Galatians 4:4 to mean that Christ was “born of a woman” alone.

“It is an article of faith that Mary is Mother of the Lord and still a Virgin.”

“But the other conception, namely the infusion of the soul, it is piously and suitably believed, was without any sin, so that while the soul was being infused, she would at the same time be cleansed from original sin and adorned with the gifts of God to receive the holy soul thus infused. And thus, in the very moment in which she began to live, she was without all sin…”

Although he did not make it an article of faith, Luther said of the doctrine of the Assumption:

“There can be no doubt that the Virgin Mary is in heaven. How it happened we do not know.”

Despite his unremitting criticism of the traditional doctrines of Marian mediation and intercession, to the end Luther continued to proclaim that Mary should be honored. He made it a point to preach on her feast days.

“The veneration of Mary is inscribed in the very depths of the human heart.”

“Is Christ only to be adored? Or is the holy Mother of God rather not to be honoured? This is the woman who crushed the Serpent’s head. Hear us. For your Son denies you nothing.” Luther made this statement in his last sermon at Wittenberg in January 1546. 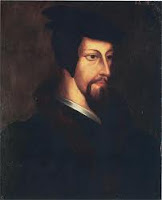 It has been said that John Calvin belonged to the second generation of the Reformers and certainly his theology of double predestination governed his views on Marian and all other Christian doctrine . Although Calvin was not as profuse in his praise of Mary as Martin Luther he did not deny her perpetual virginity. The term he used most commonly in referring to Mary was “Holy Virgin”.

“Elizabeth called Mary Mother of the Lord, because the unity of the person in the two natures of Christ was such that she could have said that the mortal man engendered in the womb of Mary was at the same time the eternal God.”

“Helvidius has shown himself too ignorant, in saying that Mary had several sons, because mention is made in some passages of the brothers of Christ.” Calvin translated “brothers” in this context to mean cousins or relatives.

“It cannot be denied that God in choosing and destining Mary to be the Mother of his Son, granted her the highest honor.”

“To this day we cannot enjoy the blessing brought to us in Christ without thinking at the same time of that which God gave as adornment and honour to Mary, in willing her to be the mother of his only-begotten Son.” 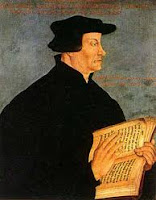 “It was given to her what belongs to no creature, that in the flesh she should bring forth the Son of God.”

“I firmly believe that Mary, according to the words of the gospel as a pure Virgin brought forth for us the Son of God and in childbirth and after childbirth forever remained a pure, intact Virgin.” Zwingli used Exodus 4:22 to defend the doctrine of Mary’s perpetual virginity.

“I esteem immensely the Mother of God, the ever chaste, immaculate Virgin Mary.”

“Christ … was born of a most undefiled Virgin.”

“It was fitting that such a holy Son should have a holy Mother.”

“The more the honor and love of Christ increases among men, so much the esteem and honor given to Mary should grow.”

I remember being blown away by these revelations. I had gone to Christian churches my whole life and I had been told what I was supposed to believe, and I had never been told these things about Mary. I felt a little bit like the fellow wearing tan below, even though I was really acting like the guy wearing black.

And then I thought, “methinks they dost protest too much.” And like young Skywalker above, I too leaped with faith and lived to tell the tale. I didn’t land on my feet though. Instead, I landed in the lap of Blaise Pascal.

And so began the process of my going back to the Scriptures and to the Church Fathers and back through the history of the Catholic Church, and finally back into the arms of Christ’s Church Herself.

Perhaps this post is a prequel in the 2BFrank saga. Sheeeesh!

To read more about the Protestant Reformers views on the Blessed Virgin Mary, and to track down the footnotes too, head on over to catholicapologetics.info. Head over to Scripture Catholic too, and bring your Bibles. Then head over to the Vatican and look at the Catechism of the Catholic Church as well.


Update: Taylor Marshall with a homily by St. Cyril on Mary the Mother of God.

August 4, 2011
What Figures Are On This Celtic Cross?
Next Post

August 6, 2011 Because World Youth Day is a Fertile Field for Vocations
Recent Comments
0 | Leave a Comment
"Vaya con Dios, Leonard; Rest in Peace."
AnonCollie Leonard Nimoy Explains The Origin Of ..."
"Thank you for sharing"
Andy To Break My Fast from Being ..."
"I've seen Matt Maher live four times...twice since this song was released. I absolutely love ..."
Veritas81 WYD Flashback With Matt Maher, And ..."
"Yes, and Dolan should have corrected the scandalous and wrong decison of his predecessor when ..."
sixbunnies Archdiocese of New York Health Plan ..."
Browse Our Archives
get the latest from
Catholic
Sign up for our newsletter
POPULAR AT PATHEOS Catholic
1

What are people starving for, Fr....
Catholic Bard
Related posts from Why I Am Catholic