Because of the Church’s Position on Abortion 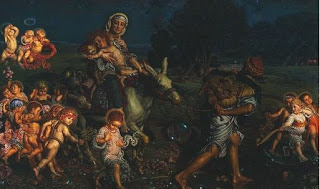 At the Battle of Mobile Bay in the American Civil War, Admiral David Glasgow Farragut gave a famous command. When one of his ships struck a mine and sank and the remaining ships in the fleet got “cold feet” and dallied, he shouted, “Damn the torpedoes! Full Speed ahead!” The remaining ships pressed on and swept the harbor of Confederate resistance. The Catholic Church’s stance on abortion strikes me as similar.

As discussed in this space before, the positions the Catholic Church takes on issues aren’t political. The positions are moral, based on the natural law, which comes from the use of God given human reason. They are, or course, also supernatural. Aborting human babies is killing innocent human beings for, well, for what exactly? Freedom? License? To cover up mistakes? To prevent overpopulation? Global warming?! How is it possible that this practice is acceptable? Marines are known for embracing phrases like, “Death Before Dishonor!” But turned on it’s head, our culture has embraced the polar opposite of this, which is another reason why it leaves me cold.

I wrote here about thoughts regarding scandals in the Church and how one scandal doesn’t authorize the order to scuttle the ship. Today, as the Church venerates The Holy Innocents (see portrait above), I can’t help but see the parallels between what King Herod ordered and what is going on here, and around the world, in the war against the unborn. I have no problem saying that the Abortion Emperor is wearing no clothes. Terrorists in the womb, anyone? Please.

Confession time: I used to be Pro-Choice —just as I used to be Protestant. Then I looked deeper into the matter and came to my senses. And this was waay before I came to my senses regarding Catholicism. I know there are many out there who believe that this is something only women can decide. But how can that be in matters that have this large an impact on society as a whole? Others will claim that after Roe vs. Wade, this is the law of the land, so don’t fight it.

But “laws of the land” are notorious for being impermanent. After all, your Constitutional rights were abrogated with the stroke of a pen recently. I can only pray for, and support the changing of, this law as well. Thomas Jefferson once said:

Of liberty, I would say that, in the whole plenitude of its extent, it is unobstructed action according to our will. But rightful liberty is unobstructed action according to our will within limits drawn around us by the equal rights of others. I do not add “within the limits of the law,” because law is often but the tyrant’s will, and always so when it violates the rights of an individual.

Oops. I got a little political there by invoking the modern perspective of one of our country’s Founding Fathers. The fact is, the Church has always been against aborting babies and no Johnny-come-lately revisionism is going to change that.

But, you argue, a fetus isn’t a “person” and really is only a little amoeba-sized peanut-shaped thingy in the womb so, what’s the harm? Besides, if abortion is illegal, women will be put at risk aborting their babies “underground.” Do you seriously think these arguments are defensible? Have you Googled images of aborted babies yet? Go ahead, click on the link. Don’t be a coward.

Back to today’s commemoration, I have an ostensibly Christian friend who, via an article from National Geographic magazine a few years back, one that proclaims the “Slaughter of the Innocents” never actually really happened, believes this report on King Herod to be true. And so, since an author published in National Geographic found at least one and maybe two scholars who can’t prove this event actually, physically happened, then I too should not believe the scriptures, the inerrant Word of God or the tradition of the Church regarding this event.

Well, pardon me if I stick to the scriptures and tradition on the historicity of this particular event. Especially since, in Israel recently, an archaeological dig has found evidence of a “heat event” where it is thought the Biblical cities of Sodom and Gomorrah are located. We have only just begun to understand what we think happened in the Great Depression (only a blink of an eye—82 years ago) so the idea that we know everything about what happened when Herod the Great went on his killing spree 2000+ years ago is suspect at best.

Back to abortion, the Catechism of the Catholic Church begins the discussion about abortion in the following way:

Since the first century the Church has affirmed the moral evil of every procured abortion. This teaching has not changed and remains unchangeable. Direct abortion, that is to say, abortion willed either as an end or a means is gravely contrary to moral law:

“You shall not kill the embryo by abortion and shall not cause the newborn to perish.”

“God, the Lord of life has entrusted to men the noble mission of safeguarding life, and men must carry it out in a manner worthy of themselves. Life must be protected with the utmost care from the moment of conception: abortion and infanticide are abominable crimes.”

That first quote above is right out of the Didache, the historical gift to us from the Church in the first century. The Catechism continues the argument in a way that would probably make Thomas Jefferson proud by proclaiming the inalienable right of life as a “constitutive element of a civil society and its legislation.” To wit,

The inalienable rights of the person must be recognized and respected by civil society and the political authority. These human rights depend neither on single individuals or parents; nor do they represent a concession made by society and the state; they belong to human nature and are inherent in the person by virtue of the creative act from which the person took his origin; Among such fundamental rights one should mention in this regard every human being’s right to life and physical integrity from the moment of conception until death.

I admit, I don’t know much. I used to think I knew a lot. In this case though, I think the contrarian position of the Church, relative to contemporary society, makes the most rational sense. Say what you will, but you cannot say that the Church has been a “flip-flopper” on the sanctity of human life. I am thankful for the Church’s unpopular stance on abortion, as I am also thankful that Mother Church venerates the Holy Innocents, that were slaughtered so long ago, on this day every year. That she continues to pray for them, and for all the innocents that are being forgotten today as well, gives me a measure of comfort, as well as confidence, that she continues to uphold God’s precepts faithfully.

After Admiral Farragut’s seemingly rash command, running through the minefield enabled his fleet to get out of reach of the Confederate shore batteries, whereupon the Union fleet destroyed all but one Confederate ship, the ironclad C.S.S. Tennessee. The Wikipedia citation reports that, “although the Tennessee did not retire, and was heavily armored, she was reduced to a motionless hulk, unable to move or reply to the guns of the Union fleet. Her captain then surrendered ending the battle.”

I hope and pray that this is how this battle will turn out as well.

December 27, 2011
This Video Needs More Bacon (Because Catholics Can Laugh)
Next Post

December 28, 2011 A Wacky Idea for Cleaning the Sacred Sites in the Holy Land- UPDATED
Recent Comments
0 | Leave a Comment
"Vaya con Dios, Leonard; Rest in Peace."
AnonCollie Leonard Nimoy Explains The Origin Of ..."
"Thank you for sharing"
Andy To Break My Fast from Being ..."
"I've seen Matt Maher live four times...twice since this song was released. I absolutely love ..."
Veritas81 WYD Flashback With Matt Maher, And ..."
"Yes, and Dolan should have corrected the scandalous and wrong decison of his predecessor when ..."
sixbunnies Archdiocese of New York Health Plan ..."
Browse Our Archives
Follow Us!