We as a nation lost a great man that day. In a way, we collectively killed a great man that day. He was martyred for the beliefs that we all knew were true, but which we didn’t want to believe, because to do so would have meant that we, as a nation, would have to change our ways. So an assassin’s bullet settled the matter for us. And though Martin lost his life on that day, the assassin’s purpose was thwarted, and the lives of the rest of us changed for the better.

The day before Rev. King was assassinated, he preached a sermon known as the I’ve Been to the Mountaintop speech. Here is a clip from his last speech,

He’s talking about the Constitution there, you know. My life, my wife’s life, and my children’s lives, are immeasurably better because of what this man spoke out about for all of us in our country. Martyrd because he dared ask that the God given rights that the Framers drafted onto parchment, should apply to all Americans, and not just some of them. But enough of my feeble words. He said everything that needed to be said on April 3, 1968. Today, on the day when our country belatedly gives him his due, allow me to let Bono & Company sing this lamentation for him. Let us dance and sing in triumph for what he accomplished in Our Lord and Savior’s name.

From the National Archives: Findings on the MLK Assassination. 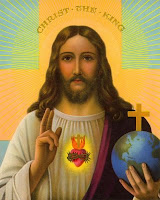 January 14, 2012
My Chinese Catholic Friends Are Spiritual...and Religious
Next Post

January 16, 2012 Martin Luther King, Jr. Was a Trekkie? Who Knew!
Recent Comments
0 | Leave a Comment
Browse Our Archives
Follow Us!

I love it when Catholics Nerd...
Catholic and Enjoying It!
Related posts from Why I Am Catholic