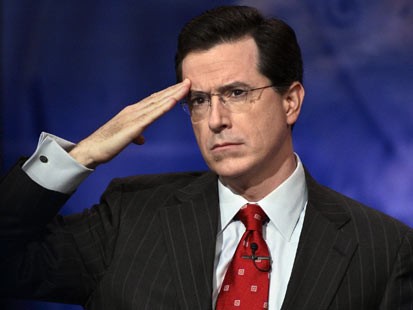 Like Jon Stewart and Stephen Colbert. Because nowadays, evidently, only satirical comedy shows can provide the low-down on what our Ruling Elites are up to. Like this quickie you never saw on the Sunday Morning Talking Heads shows. Besides, Brian Williams isn’t allowed to analyze news. Not like this, anyway.

Up is down; black is white. Or as Mark Shea wonders,

Aside from the obvious fact that the main problem is that our Ruling Class has just passed a law empowering the President to declare you and me an Enemy of the State, strip you and me of habeas corpus and throw us in prison forever on the basis of his unilateral and omnipotent will alone, there is something else deeply troubling here.

It’s this: It’s Rachel Maddow warning us of this, not supposed “small government conservatives”. Indeed, the main voices who have spoken out on this have been people like Jon Stewart, Glenn Greenwald, the ACLU and sundry other lefties. On the Right (with the exception of “He’s clearly insane according to all right-thinking conservatives” Ron Paul), it’s been remarkably quiet as America takes the plunge into become a lawless police state. One has to ask: what in hell are conservatives conserving anymore?

Brian Williams may be asleep, not to mention Rush Limbaugh, Glenn Beck, et.al. Thankfully, Rachel is wide awake though.

The question is worth repeating: what in hell are “conservatives” conserving anymore?

January 10, 2012 A Message From A Renowned War Hawk To the "War Parties" of Today: Peace Out!
Recent Comments
0 | Leave a Comment
"Vaya con Dios, Leonard; Rest in Peace."
AnonCollie Leonard Nimoy Explains The Origin Of ..."
"Thank you for sharing"
Andy To Break My Fast from Being ..."
"I've seen Matt Maher live four times...twice since this song was released. I absolutely love ..."
Veritas81 WYD Flashback With Matt Maher, And ..."
"Yes, and Dolan should have corrected the scandalous and wrong decison of his predecessor when ..."
sixbunnies Archdiocese of New York Health Plan ..."
Browse Our Archives
Related posts from Why I Am Catholic