Because God Is A Crazy Farmer, Thankfully! UPDATED 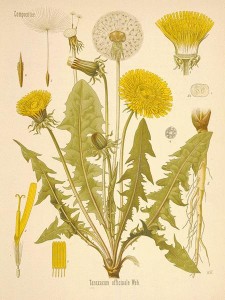 I’ve been working in the yard around Casa del Weathers. One thing I’ve been doing a lot of lately is weeding. Not that I have some sort of pristine yard that I need to keep up so I can one up the Joneses, or anything. But I like my flower beds to contain flowers, and not weeds. As for my yard, which out back (especially) is pretty much a random assortment of weeds and grasses that are shade tolerant, I pretty much follow the dictum to live and let live.

Except for the dandelions.

Something about dandelions brings out the beast in me. The passion to rid my yard of them has been unflagging for all the years I have been a homeowner which, come to think of it, is getting close to something like 20 years. And I ged rid of them the old fashioned way. That is to say, I don’t flood my yard with expensive chemicals to kill them. Instead, I use this little tool, see, to yank them out, root and all. 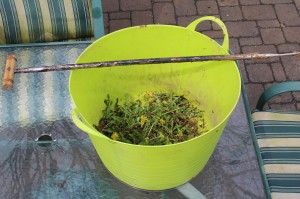 A funny thing happens to me while weeding. I find that it’s impossible for me to yank dandelions without ruminating upon the parable of the wheat and the weeds. Does the same thing happen to you? By happy coincidence, I have also been reading Fr. Andrew Greely’s The Great Mysteries. It is there that I ran across the idea of God as the “crazy farmer.”

And isn’t it so? Surely the biblical evidence for this statement of truth is overwhelming. Who but a mad, nay, insane, farmer would allow his fields to remain infested with weeds, after realizing the predicament, and then do nothing, consciously, about it until the harvest? Who but a crazy farmer wouldn’t build bigger barns to store his harvest in, if the yield demanded? Who, but a crazy farmer, even bothers sowing seeds everywhere so carelessly, so willy-nilly, and not just on carefully prepared ground made ready for that sole purpose of receiving the seeds? None that hope to make a living at farming, I’m sure.

That is what I thought to myself as I inserted my little hooked tool alongside the center of another dandelion. I pushed the tool into the ground a few inches, and worked the soil around to loosen it, so that the hook could grab the tap root of my least favorite plant in all of God’s magnificent creation. Turning the handle of the tool, I then extracted the dandelion, root and all, and tossed it into the bucket (see photo above) containing it’s fellows.Then I tapped the soil back in place to cover over where the offending plant had been, and moved on to scan the yard for the next one.

I thought to myself, “how easy this all is! Leaving the dandelions in my yard, when they can be so easily removed, would be ridiculous!” Of course, many times the root breaks, and I’ll have to play this game again next year, but what’s life without chores like this to do? Just as I was about to take these thoughts to the next logical conclusion, a new thought popped up that helped me ponder the wisdom of God, the “crazy farmer.” That is the mystery of how easily, and unexpectedly, the “weed” can be turned into that which the farmer values: a plant that bears good fruit, instead of ill. By the power of God’s grace, the weed can be transformed into the wheat, just as quick as you can blink an eye.

And it can revert back to being a weed again, just as quickly, which is a danger to remind ourselves of often. Even if the seed is good, and the soil prepared, the little plant may wind up yielding nothing of value, much as the seed that fell on the rocky soil, or on the beaten path, that mysteriously may turn out to flourish.

How often have I been the weed, and not the wheat? More times than I care to admit. Which is why I’m thankful that God is merciful in such an astounding, non-commercially viable, way. This mercifulness speaks to the mystery of the fullness of time, of which no one knows the hour, or the day, when their winnowing will occur. It also speaks to how limited my own worldview is, as a cursory search turns up volumes of data on the positive benefits of dandelions, both as food, and even as medicine. Who knew?

I’ll continue to keep the Annual Harvesting o’ the Dandelions, while being thankful that the Crazy Farmer has such madcap ways of calling to my mind a reality that is not the way of the world, but a way that should be, and can be, if I only open myself to the alternative. Perhaps I’ll even develop a taste for eating dandelions? Food for thought, that.

“Um, honey? I’ve got a recipe I think we should try.” Stay tuned.

UPDATE: I sauteed (in olive oil with garlic and lemon juice) dandelion leaves (yes, from my yard), on toast with a fried egg. It was delicious. 🙂

March 26, 2012 One for the Feast of the Annunciation of the Lord (Music for Mondays)
Recent Comments
0 | Leave a Comment
"Vaya con Dios, Leonard; Rest in Peace."
AnonCollie Leonard Nimoy Explains The Origin Of ..."
"Thank you for sharing"
Andy To Break My Fast from Being ..."
"I've seen Matt Maher live four times...twice since this song was released. I absolutely love ..."
Veritas81 WYD Flashback With Matt Maher, And ..."
"Yes, and Dolan should have corrected the scandalous and wrong decison of his predecessor when ..."
sixbunnies Archdiocese of New York Health Plan ..."
Browse Our Archives
get the latest from
Catholic
Sign up for our newsletter
POPULAR AT PATHEOS Catholic
1