For Your Lenten Friday Night At The Movies IV 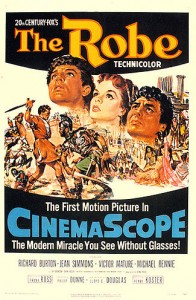 I’ve said it once, and I’ll say it again. One of the best things I like about doing this Lenten movies series is seeing films that I’ve never seen before, but I should have. I never got around to it, as I was too busy conquering (ha!) the world, or maybe I was on deployment overseas.

All of these may be reasons why I never saw Richard Burton and Jean Simmons in The Robe. But it belongs in the pantheon alongside Ben Hur and The Ten Commandments and I’ve never seen it?! That travesty ends tonight. Here’s what the introduction over at Netflix has to say,

Hardened Roman Marcellus Gallio (Richard Burton) oversees the crucifixion of Jesus Christ in Jerusalem. But problems arise when Marcellus wins Christ’s robe in a dice game, played beneath the dying man. Haunted by guilt, Marcellus hopes that destroying the garment — now in the possession of his escaped slave (Victor Mature) — will cure his hallucinations.

Guess what else? It’s the first film that was ever shown in CinemaScope, which means widescreen to us rookies. I’m looking forward to when Marcus meets St. Peter, for sure.

It’s also available on Netflix instant streaming, which helps the cause immensely. All that’s lacking is some popcorn and your favorite beverage. Please silence your cell phones, and I’ll dim the lights.

March 24, 2012 Joe Six-Pack's Public Comment on the HHS Mandate "Proposed Rule: Certain Preventive Services Under the Affordable Care Act"
Recent Comments
0 | Leave a Comment
"Vaya con Dios, Leonard; Rest in Peace."
AnonCollie Leonard Nimoy Explains The Origin Of ..."
"Thank you for sharing"
Andy To Break My Fast from Being ..."
"I've seen Matt Maher live four times...twice since this song was released. I absolutely love ..."
Veritas81 WYD Flashback With Matt Maher, And ..."
"Yes, and Dolan should have corrected the scandalous and wrong decison of his predecessor when ..."
sixbunnies Archdiocese of New York Health Plan ..."
Browse Our Archives
Follow Us!