Death to Tribalism: Or Several Anti-NDAA Bills in Congress You Should Support Now 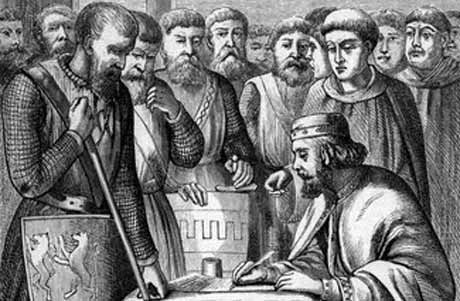 I know, I know, it’s easy to forget that which has gone on before. The Magna Carta, signed by King John way back in 1215 AD? That is sooooo eight centuries ago. That’s what it seemed Congress and the Administration said last winter when they fell all over themselves approving the unconstitutional law which strips us of our our rights of habeas corpus, etc. Language like this in that document helped build a foundation for our own Constitution,

39. No freemen shall be taken or imprisoned or disseised or exiled or in any way destroyed, nor will we go upon him nor send upon him, except by the lawful judgment of his peers or by the law of the land.

For those who assumed that our valiant heroes on the right thinking Right would have saved our bacon on that particular left-leaning bill, I remind you that it passed in the Senate by a 94 to 6 margin in the affirmative. Bi-partisan support like that is difficult to find these days.

Speaking of Bi-partisan support, that is exactly what a couple of bills in Congress need right now. My very low-level friend in high places (Ed Chigliak, Cicely Alaska) notified me of the following article all about the situation this morning.

It seems Mark Udall (D- Colorado, and one of the six to vote “nay” on NDAA), and Representative Adam Smith (D-Washington), who with a name like that should warm the hearts of all conservatives, have both sponsored bills to fix the freedom killing measures that were passed so blithely by our well-meaning overlords, and signed into *cough* law by our benevolent leader, a few short months ago.

Joe Wolerton, II, of The New American spells it out for us in his brief entitled, Anti-NDAA Bills Worth — and NotWorth — Supporting ,

Since the beginning of hostilities in the wake of 9/11, the federal government has often had problems proving membership in al-Qaeda of those arrested as “enemy combatants” in the War on Terror, so imagine the difficulty they would face in presenting evidence of affiliation or adherence to that shadowy, ill-defined organization.

Perhaps the most invasive aspect of the mortal malady that is the NDAA is the fact that it places the American military at the disposal of the President for the apprehension, arrest, and detention of those suspected of posing a danger to the homeland (whether inside or outside the borders of the United States and whether the suspect be a citizen or foreigner). The endowment of such a power to the President by the Congress is nothing less than a de facto legislative repeal of the Posse Comitatus Act of 1878, the law forbidding the use of the military in domestic law enforcement.

It is this last bit of Stalinist-style authoritarianism wherein, as Shakespeare would say, lies the rub of the NDAA. The denial of habeas corpus comes later; it is the delirium, not the fever, in a manner of speaking.

Put simply, Americans would need not worry about being held without charge if the President was not authorized in the same act to deploy the armed forces to round up the “suspects” and detain them indefinitely. Being apprised of the laws one is accused of having violated is important, but it’s the detention and the manner of it that must be of more immediate concern to those who are noticing the body politic getting weak.

It is inarguable that the language of Rigell’s bill does nothing to shore up the Posse Comitatus Act or to divest the President of the (unconstitutional) power to employ the military as his own personal retinue of lictors, clearing the way for his imperial procession.

Were this bill to even address that central issue it would merit our praise and our promotion, but this measure amounts to nothing more or less than a powerless placebo distributed to the people as a palliative. It is an injection of simple saline in a body wracked with a rapidly metastasizing and deadly disorder that could otherwise have been effectively treated and eventually cured.

Fortunately, there are those in Washington who appreciate the urgency of the situation and the existence of a path back to health.

Representative Adam Smith (D-Washington) and Senator Mark Udall (D-Colorado) have  introduced  companion bills  that are just what the doctor ordered.

H.R. 4192 and S. 2175 (both bills are aptly named the “Due Process and Military Detention Amendments Act”) would explicitly repeal Section 1022 of the NDAA, as well as ban the armed forces of the United States from participating in the detention or imprisonment of citizens who have been neither formally charge nor tried for their alleged offenses.

The precise language of the bills mandate that:

“Section 1022 of the National Defense Authorization Act for Fiscal Year 2012 is hereby repealed.”

That is just the brand of potent medicine this ailing, but otherwise healthy republic needs.

Hear, hear! Read the rest of Joe’s piece, as he ID’s a toothless bill, as well as another good one sponsored by Ron Paul.

As for the POTUS, he already signed the monstrosity. 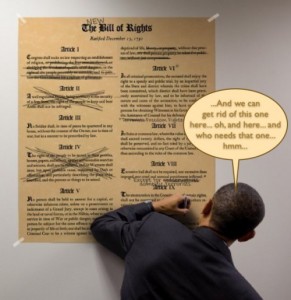 April 23, 2012 Democrat Opposition to Obamacare and St. Thomas Aquinas? There may be a link spelled F.R.E.E.D.O.M.
Recent Comments
0 | Leave a Comment
Browse Our Archives
Follow Us!

Remembering Mr. Richard Kremin
Labyrinthine Mind
Related posts from Why I Am Catholic

Steve Skojec: Pope Francis is a Two-Faced Liar...
Folks, this is an absolutely classic, playbook example of what I have...
view all Catholic blogs
What Are Your Thoughts?leave a comment
Copyright 2008-2017, Patheos. All rights reserved.